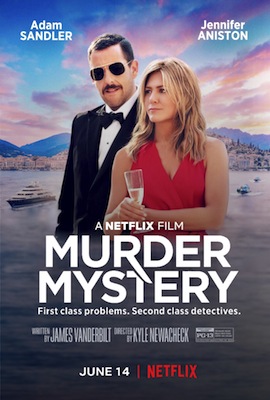 Murder Mystery is as much about a husband and wife relationship as it is about the mystery itself. Unfortunately director Kyle Newacheck and screenwriter James Vanderbilt consistently draw lines through their own credibility to present a realistic relationship to begin with, filling the movie with frustrating misconceptions about what it’s like to be in one.

From the 2nd scene, I already feel like I’m watching the Hallmark Channel as women sit around a beauty salon and man-bash using cliched examples that were possibly funny in the ’90s when that stuff was fresh. We hear about petty problems. One woman talks about her husband not splurging for a trip to Europe after 15 years, another about her’s doesn’t leave her notes every day. Not that the romantic stuff should stop once you’re married, but there’s no need to let these concerns ruin your day. At one point our main character abandons her husband and his livelihood because of one argument. We just wish the filmmakers had a better grasp on actual relationships.

Murder Mystery follows Nick Spitz (Adam Sandler), a New York City police officer who’s been lying to his wife, Audrey (Jennifer Aniston), that he’s been promoted to detective even though he keeps failing the exam. Audrey guilt trips Nick into splurging on a vacation to Europe, so the two of them book a trip immediately. On the plane, they befriend billionaire Charles Cavendish (Luke Evans), who invites the couple to join him and his rich family on a yacht for the week. After some deliberating, the two of them decide to go.

Turns out, the gathering of Charles’ closest acquaintances is really a meeting called by his rich and elderly uncle, Malcolm Quince (Terence Stamp), in order to tell everyone that they’re all being written out of his $70 billion will. Instead, his riches will be signed over to his very young wife Suzi (Shiori Kutsuna), who also happens to be Charles’ former fiancée. With everyone in the room for the meeting, including Nick and Audrey, the lights suddenly go out. When they come back on, Charles has a knife in his chest, lying dead. Due to their unexpected presence on the boat, Nick and Audrey are immediately the main suspects in the investigation. So the two of them take it upon themselves to crack the case before enough evidence is pinned on them to put them behind bars.

Sandler is great in his toned down, albeit still funny role. He takes a slight step back, not relying on his usual goofy voices and unique idiosyncrasies, but on his crafty and usually underutilized delivery. People forget how good of a straight man he can be because he’s always so silly, but here he’s able to shine in that role instead of trying to handle the stooge role as well.

However, the comedy in Murder Mystery can be somewhat a crutch at times. There are several scenes when people have guns pointed at them and are cracking jokes anyway. The filmmakers think they have to keep things light and engaging, committing to being a straight comedy instead of ever allowing anything to get too serious or suspenseful. But in a mystery movie, we need that thrill.

Murder Mystery isn’t without its missteps. There are some definite frustrating moments, but despite the bumpy script, the details of the mystery itself are well-tailored and pretty unique. It may take some obvious notes from gialli like Blood and Black Lace, or some Agatha Christie novels, but the twist in this one really had me satisfied. The reveal at the end wasn’t merely the result of a series of convenient evidence arbitrarily pointing at a desired culprit, instead the plot points were carefully placed so that the final result could be nothing else. Very impressive. And it may just be enough to overcome the film’s glaring issues early on.