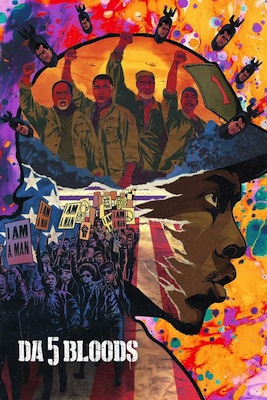 Tensions are high right now in the United States. There are protests against law enforcement, often resulting in riots, and many cities are enacting plans to defund (and defunct) the police (maybe they can use robots?). Times are objectively confusing. Not confusing because the issues are always divisive, but because the concerns are plentiful. There is no one solution to making change. No simple fix. In a country as great and diverse as ours, there never will be. Right now, the topic of racism is becoming politicized like never before, often detracting from a potential change in our mindsets that may (and hopefully will) occur.

The Vietnam War and how it relates to the Civil Rights Movement may be tangential to the debate. Though framing the conversation amidst today’s world with sexagenarian black veterans makes the conversation a little more fitting.

Spike Lee’s latest, Da 5 Bloods, is as timely as ever (is it really a Spike Lee Joint if it’s not timely?), reminding us of promises made during the Civil Rights Era, prompting us to look back and see how much – or how little – has changed. Well, things have changed, in both America and Vietnam. But what Lee focuses on here is comparing the hatred of Americans in Vietnam to the hatred of blacks in America.

While some still hold grudges, there are many Vietnamese people who can see past the disgraceful activities of the US during the war. They know the matters have fizzled out. Most people in America have no feelings, ill or otherwise, towards Vietnam and their people. But if hatred for Americans can die down in a country that saw so many innocent civilians murdered, Lee poses, then why can’t certain Americans see past their hatred for black people?

For much of the Vietnam era, black Americans and the Vietnamese people shared a common enemy. Black people were being forced to fight in a war for a country that hadn’t yet accepted them or given them equality. They were killing America’s enemy for reasons they couldn’t care less about, and also getting killed, themselves, in the process.

While Da 5 Bloods definitely educates the masses on the dynamics of American race relations during ‘Nam, the film doesn’t necessarily clear our minds about anything going on right now in the world, with Lee often seeming to possess the same imbalance of emotional confusion and verbal assertiveness as we do, failing to give us any clear answer, or better yet, a concise vision – which, admittedly, isn’t easy to have. Although he’s done it so often in the past, we’ve now come to expect it.

The movie follows a group of four middle-aged African American veterans in present day as they return to Vietnam to retrieve a multi-million dollar treasure they buried there all those years ago. Their fifth squadron member and leader, “Stormin’” Norman (Chadwick Boseman), died in combat, but his fierce leadership hasn’t been forgotten.

We instantly know there will be flashbacks, since Boseman is easily the biggest star of the film, and nobody’s going to waste a talent like that by only putting his face in old photographs. No. Lee occasionally switches the presentation from widescreen in present day to an antiquated 4:3 aspect ratio that takes us back in time to show Norman’s leadership in action during the war in the late ’60s.

The four older actors play themselves as twenty-somethings during the flashbacks, but Lee opts out of the popular de-aging technology (as seen in Netflix’s own The Irishman). Rather, they appear as their current-day physical selves, aged and matured. It’s an interesting choice, but one that really helps establish an emotional continuity when following these characters from past to present and back again.

The four men are meeting up after years without seeing one another. It’s obvious that time has changed them, but they’re still close. Over the course of the movie, relationships are tested and true colors come out as the bunch relive the olden days while they embark on one last adventure together.

The main star is Paul, played by Delroy Lindo, a nearly-psychotic old man who proudly defends being conservative while his companions are all Trump-haters. This is a big source of contention throughout the film, especially when Paul’s son, David (Jonathan Majors), unexpectedly shows up in Vietnam and demands a share of the money and tensions rise to a boiling point.

Lindo and Majors are the definite highlights among the cast, which features, if we’re being nice, largely marginal performances. But the acting should be the least of your worries when discussing the technical side of the film.

Fans of Spike will notice a definite slump in crispness compared to his past classics. As likable as Da 5 Bloods is, Lee is objectively at his structural worst here. It’s almost impossible to put your finger on the film’s tone. The battle scenes are visually cacophonous, suffocating to where watching chaos unfold on screen only adds to the narrow framing. Cinematography looks washed out and CGI work is particularly poor, with important moments ranging from the gratuitous schlock of Roger Corman to the impactful austerity of Platoon.

The script, co-written by Lee along with Danny Bilson, Paul De Meo and Kevin Willmott, is often so abysmal that it’s as though our director has forgotten all about “show, not tell.” There’s almost a glorification of a lack of structure here. Sometimes it works, and sometimes it fails embarrassingly. One moment the film feels like a documentary-like candid portrayal of four friends reuniting, while the next will try to shoehorn the kind of wry humor depicted in Lee’s last endeavor, BlacKkKlansman.

Admittedly, the oft-ludicrous filmmaking style makes for an interesting aesthetic. The overall journey of the characters is fun and thrilling, but largely due to the charms of the actors, the peculiar conflicts, and the occasional displays of cultures clashing.

As deep as this movie tries to get, the characters are, at best, made up of cliched archetypes, so we can say, “Oh okay, this guy’s conservative, so everything he does will fall in line with that,” or, “Oh okay, this guy’s a social justice warrior, so we won’t ever see him do anything selfish.” The broad characterizations often undermine any depth Spike tries to conjure, and there’s a lot here to unpack.

There’s a definite anger behind Lee’s film, and rightfully so, but oftentimes the director lets his emotions get in the way of his mental clarity and ability to make his message more impactful to needy ears. He’s afraid to show any of our leads in a negative light – aside from Paul who’s a MAGA hat-wearing Trump supporter and literally bears all of the brunt of the controversial blows from the audience.

Spike also inserts a lot of archival footage and grisly photographs from the war during the narrative when they’re deemed appropriate. It’s effective and punctuates a lot of what he’s trying to say. And at least this time, the director places the material into his film rather than using it as a haphazard epilogue like he’s done in the past.

Terence Blanchard, frequent Spike Lee collaborator, composes the score, which may actually be the worst aspect of the film. The cues are annoyingly overbearing and naggingly manipulative, as though James Horner were composing music for a Hallmark Channel movie. Incredibly, none of this feels out of place amidst the B-movie tendencies already established.

At 154 minutes, this movie is long, largely because Lee never tries to interweave politics into the narrative flow. Instead, he keeps stopping the plot to give us his very obviously-understood two cents – as though he’s unable to keep the story moving forward when there’s any sort of debate happening between characters. Lee definitely does his research on the overarching topic and provides informative and valuable content, but he also never gives it time to breathe or sink in. Ever.

Still, Lee shows flashes of his historically brilliant filmmaking and emotional resonance: a scuffle with a chicken salesman who keeps antagonizing Paul and his PTSD; the former soldiers mourning their fallen commander; or just a simple, yet beautiful shot of the men hiking through the rice fields in the Vietnam countryside. On a purely cinematic level these moments remind us there’s a master filmmaker at work here, even if that brilliance is often misplaced.

However, the script also gets certain statistical information incorrect, such as the number of black Americans who fought in Vietnam, and fails to acknowledge that President Johnson removed many of them from participation in the war after being urged by civil rights leaders to do so, which had the effect of dropping the overall casualty rate in half.

Da 5 Bloods is an interesting package, offering compelling food for thought but never offers any definitive outlook for these characters or the film’s underlying message—mostly because it tries to cover too much political ground at once. There’s a definite spirituality that will get you good when you’re least expecting it, and even judged by Spike Lee’s considerable catalog, there’s an undeniable appeal to the movie’s odd execution: an art house sensibility with a mid-level budget. But when Lee forgets to educate instead of preach, falling into on-the-nose sentiment or overt sanctimony, he begins to lose his footing. You wish that Lee kept his eye on the prize, because this is a fascinating story just waiting to be told correctly, one that’s more than capable of speaking for itself.