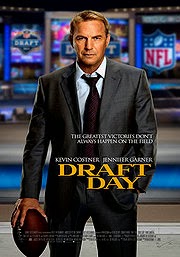 I feel like it would be tough to do a film about professional sports. It’s like–who do you include? who do you leave out? Do we create a whole new league? It’s tough because the people that follow these sports are fanatics. People who know the players, coaches, and personnel inside and out. These are the people that you have to trick into believing that these new made up players and coaches and owners are real for 2 hours. They know they’re not real. These people are also your target market. I like what this film did by creating an alternate universe where the league and all of the teams in it are the same–even most of the history. What they DID change, however, is the names of everyone in the modern version of this reality. As though in the past couple years, this new film universe version of the league came to be. It provided a platform for the filmmakers to pretty much create and manipulate any stories and scenarios that they please. So as far as the target market goes–I think that they will be less annoyed and more excited about the upcoming draft and season.

It has an interesting style to it. The cuts and split-screens are effective for the fast-paced on-the-clock movie that it is. It helps create the urgency even when the urgency isn’t really there. Although at times it makes if feel as if too much is going on with the narrative.

The script also begs some questions such as why couldn’t they have just traded for other first round picks for their future years. I mean, if the team is that bad, then they must have SOME players that they can use or combine to get more first round picks. However, I do like how the romantic subplot was delicately sprinkled in at the right times with the right amount of frequency.

I definitely liked this film–didn’t love it per se, but liked it a lot. It may be predictable, but it’s also surprisingly suspenseful. It has a fairly high redeeming value.