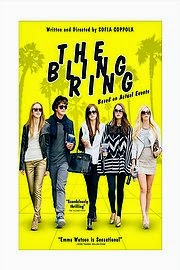 This is a film about the rich stealing from the rich. There is a lot of social commentary expressed in the details of this movie. It parallels these kids aspiring to live the lives of celebrities and needing to have it all. Chasing something that they don’t have and never realizing that it’s still not there–even though the audience does. And the lack of privacy in the celebrities lives is how they end up being so “good” at burglarizing their homes, but it’s that lack of privacy which ultimately does them in at the end.

There was depth in these characters as a group through the nature of the story, however I found myself wanting a little more focus on their individual development rather than focusing too much on what it’s trying to say about our culture. Although, maybe this lack of depth streamlines the point of the film even better. And either way, this is the decision of the filmmaker and maybe that was the route that she wanted to take. But even still, it could have used just a little more critique of the rich and famous lifestyle than it gives because it finds itself teetering at times.

Although the script wasn’t all that great and there wasn’t a whole lot of meat, the way the plot developed was unique. It’s not quite the Social Network/Spring Breakers mashup that it strives to be, but it does tell the story well. And Coppola’s direction isn’t perfect, but I do like how she allows the actors to have a very natural free-flowing behavior as they interact with each other.

Overall, this isn’t really my taste tone-wise, but I did really enjoy the story that was told and the statements that it made