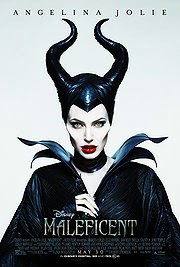 When Disney created the character of Maleficent back in 1959 I wouldn’t be surprised if they had Angelina Jolie in mind even back then. The role was made for her and not the other way around. With that aside, you don’t really start liking the movie until the 2nd act. The 1st act was rushed and could have been longer. They don’t show enough of the relationship between Maleficent and Stephen and the whole time you want them to fall in love more deeply. So much so that you don’t feel the heartbreak when he betrays her–other than the fact that she loses her wings. But there was no chemistry between the two characters and therefore it’s harder to understand why she is so hurt. But from the point where she curses Aurora onward the film becomes a little more interesting. However, for an origin story, it just didn’t spend enough time on the origin itself. More of it is spent on the actual twist in the well-known story.
Also, they don’t explain why she doesn’t use magic to grow her wings back–something that they could have done very easily when Aurora was asking her all those questions.
The film does fall on the predictable side at times. Not because of the story itself but because the score, although big and powerful, likes to tell you what was about to happen before it actually happens. A big no-no in my eyes.
Overall, the script could have been better and it seems like they spent more time worrying about the visuals–even though they are really nice to look at. It also could have had a PG-13 rating along the lines of the Pirates movies. They wouldn’t have had to sweeten it up as much.
Twizard Rating: 82