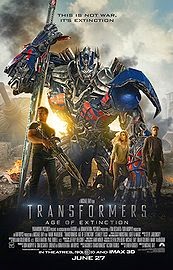 I never understood why the first 3 Transformers films are hated as much as they are. Personally, I’m a big fan. I’m also a big fan of Shia LaBeouf–all controversy aside. People may not like the first three, but whether you realize it or not, Shia made them watchable. His relationship with Bumble Bee, his parents, and his girlfriend(s), his personal struggles, his unique comedic timing–but ultimately his vulnerability and charisma made it work. They weren’t bad movies. People just like to be nitpicky about things that they grew up with I guess. But with the thought that this new trilogy was created by Michael Bay to “make everyone forget” about the first three films, I soon realized that if that was his intent, he failed miserably. Not only was this film not as good as the original trilogy, but it was just not a good film altogether.
First of all, there were way too many antagonists and way too much going on. Add on the subplots about Mark Wahlberg’s character’s personal issues and you have yourself a cacophony of a script. There was a point towards the final battle scene where I literally asked myself “Why is all this happening again??” out of legitimate confusion. You know it’s bad if the robots had more depth than the humans. The characters were thinner than the paper they were written on. I just found myself completely detached. The one story line that actually could have made you feel for Cade (the issue between him and his daughter) was instantly predictable–not to mention forced and unbelievable. The only characters that weren’t completely annoying were Cade and Joshua (Stanley Tucci). For such an action packed movie it shouldn’t have you looking down at your watch–save that for the art house films.
It had its moments, but just not enough of them to warrant giving it a great rating. The only thing left that would have given this film bonus points for coolness would have been if it made a good connection to the first trilogy–or at least gave us some easter eggs! But with a runtime of over 2 and a half hours, it should have everyone realizing that Shia wasn’t all that bad after all.
Twizard Rating: 64
Advertisement