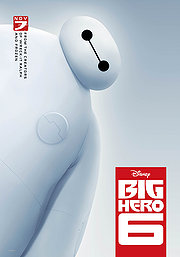 When writing a script you’re not supposed to be too vague, but you’re also not supposed to be too obvious by not letting the audience figure things out for themselves–especially the obvious things. But this film loves to reiterate the apparent. The dialogue is painfully bad, and even corny a lot of the time, and unfortunately these mistakes aren’t obvious enough for most critics who have been blinded by a Disney film to see that this script is below par. Usually Disney does a really good job of not dumbing down its dialogue for kids–or to kids–but it definitely fails at that here. That’s not to say that many of the scenarios and much of the humor haven’t been written to appeal to both young and old. In fact, this movie did a good job of making the adults laugh too.

Also speaking of the negative, this film has a hard time with character consistency. These consistencies are vital for invoking emotion when needed and for giving our heart a tug when something sad or moving happens. The archetypes feel forced and the script veers away from certain characters’ tendencies for the convenience of a given situation. This, along with a couple of nitpicked plot holes, should be a writer’s nightmare. For instance, it takes Hero (a genius) 30 minutes of screen time to suspect that Alistair Krei was the one that stole his technology–the most obvious initial candidate to be the masked villain–when it takes the audience 30 seconds to start suspecting it. I understand that they stall Hero’s suspicion in order to prevent the audience from ruling it out right away as a decoy, but it doesn’t help my issues with the script. Although Disney has outdone themselves in the art and effects departments, it seems like they cut corners in revising the screenplay.

I will say that Baymax is the absolute highlight of this film. Without him this film would have suffered a lot, and it’s easy to say that because the premise wasn’t revolving around him necessarily. (Meaning, they could have hypothetically made a film called Big Hero 5 that would have made it into the can). This movie’s entertainment value increases rapidly once we establish Baymax as a permanent figure in this film.

The story is nicely paced and moves in the right direction for pretty much the whole film, I just think that it could have underwent some more rigorous rewordings in the writing department.