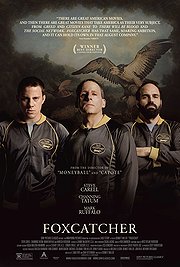 The only problem with Foxcatcher is that Bennett Miller deliberately creates such a gloomy ambiance that the film has a hard time getting away from it enough to give it any energy. With all the slow building throughout the film, the climax manages to still feel unwarranted. The direction surpasses the script in many ways. You can see Miller wanting to make this film bigger than it is, and more meaningful. But there is just not a whole lot to work with. There are scenes that seem important, but ultimately lead to nowhere. Then finally, after 2 hours, you have a murder.

While the film may be long, it’s not poorly made. We see a brilliant comparison between two types of people who long for the same thing–camaraderie. The acting of the three leads is fantastic–especially Steve Carell, who channels nodes of Michael Scott here and there.

You also have to appreciate very deliberate and conscious direction and pacing. Miller does this thing in the film where he likes to keep certain things out of sight (the tops of character’s heads or significant objects being referred to)–almost to draw comparisons to the fact that with these characters there is more than meets the eye.

Just don’t go into this movie expecting a story about wrestling, because while it touches upon the basic routines, it’s not what Hoosiers is to basketball. The sport of wrestling isn’t used as a metaphor for anything really. The film is a character study.