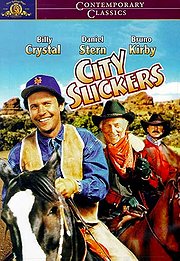 I always say that even the worst movie is good if it has Billy Crystal in it. And although Crystal helps make this film what it is, along with a great supporting cast, it’s really a nice story. It’s about a man’s second coming-of-age and it’s about camaraderie and second chances.

The comedy is slightly irreverent and jarring, as it is partially a satire. It juxtaposes tragedy with humor, but that goes along with the film’s theme of “That’s life!” And although the intermittent jokes may disrupt and off-put the film’s tone at times, the build up to the 3rd act is well worth the wait.

Even if the humor is not for you, the story is undeniably charming. If I ever get to the point in my life where I’m facing a midlife crisis, I will be sure to queue up City Slickers.

For a comedy, the writing in this movie is superb. There aren’t any silly plot holes or goofs that stand out. This film just doesn’t do anything to annoy you.

With circumstances that are easily related to and fun in-jokes you feel like you’re on the journey with them. And as someone who hasn’t yet gotten to their midlife crisis, this movie makes me realize that it won’t be so bad.