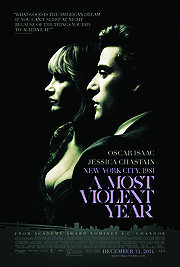 While “A Most Violent Year” is a really well done, entertaining movie, and I liked it a lot, it’s just not necessarily my style. Which isn’t a bad thing, just a matter of taste. But with that in mind, there are still pretty much only positives to talk about.

I enjoyed the tension between the anti-gun husband and his gang-raised wife. It’s a portrayal of marriage as being a partnership, even to a fault–that even the biggest differences can be worked through and superseded.

It’s slow, but never boring. It keeps you in the moment while letting you anticipate Abel’s (Oscar Isaac) next move. You love this character and admire his strength and integrity. So then when we see him finally at his most vulnerable, we feel close to him. We feel privileged that he shared with us a moment of weakness, much similar to how we feel the first time we watch our dad cry. Jessica Chastain, as his wife Anna, is a magnificent juxtaposition to her husband. She sells the role so well. You don’t want to like her, but you do anyway out of respect for Abel.

It’s one of those movies that is really well done, but will probably be overlooked for all the awards. It’s good but it just doesn’t sweep you off your feet like you’re hoping it does.