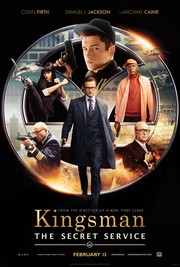 “Kingsman: The Secret Service” may not have a perfectly consistent tone, but it has a consistent style.

Harry (Colin Firth) attempts to stop the evil mastermind, Valentine (Samuel L. Jackson), from committing mass genocide on the planet amidst the recruiting of new agents to his top secret spy agency. One of these agents, Eggsy (Taron Egerton), is the son of a former agent who died on the job. The film is as much about Eggsy’s self-realization as it is about stopping Valentine from destroying the world.

Despite it’s personal-growth-filled background, the film lacks some depth for an origin story. Part of this is due to it’s inability to take anything seriously, including several genocidal acts–one of which occurs as Lynyrd Skynyrd’s “Free Bird” wails in the background.

The film is cliche in certain aspects and dialogue is a little pedestrian–that is, when Colin Firth isn’t spewing out profound wisdoms to the younger recruits.

But regardless of anything negative you can say about this movie, it’s ridiculously engaging throughout. The movie’s style and set pieces are incredibly unique. It does everything possible not to make the viewers feel like it’s generic–and it works! It tips its hat to classic spy films while becoming a one in its own right.

The cast is just fine. Jackson does a great job as the flamboyant and sinister villain, and Firth is undeniably believable as a spy–so much so that it feels like he could be the next Bond.

It won’t be the best film of the year, but it may be many people’s favorite. It’s definitely worth watching.