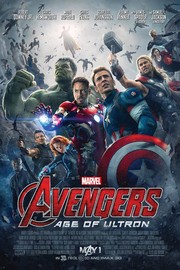 Possibly the 2nd most anticipated movie of the year (behind Star Wars) is Avengers: Age of Ultron. For fans of the series thus far, this movie won’t disappoint, but many might not see it living up to the standards set by its 2012 predecessor.

In Age of Ultron, Tony Stark (Robert Downey Jr.) secretly activates an artificial intelligence program called Ultron that he hopes will be able to do the jobs of the Avengers team so that they can retire. Of course, things go wrong as Ultron decides to seek his independence and destroy the world.

The storyline is a little too convoluted to follow and we see small outcomes of Ultron’s huge threats, but it’s never clear why it’s all happening. There’s no sensible reason why Ultron decides to be evil. Much like my issue with Guardians of the Galaxy, the antagonist has no understandable motive. The best villains have a motive that we can empathize with, because it gives him or her more relatability. To hate is to love, right?

That’s really the looming issue over the film. But honestly, this film feels a lot more organic than the first. 2012’s Avengers is the epitome of action entertainment, but focuses more on satisfying the audience’s wants. We were anticipating that movie as though it had all lead up to that point. But while it had the tonal consistency and even pace that this new movie doesn’t, it felt a little too contrived and polished.

A main reason why I think that American Graffiti is the greatest movie ever is because it doesn’t feel scripted. You see the bumps and bruises, and it feels real. Age of Ultron gives us a little more of that with its humor. It’s the story that needs to be told, not the one that we want to be told. It’s filled with effective social relevance and doesn’t have an overload of quippy in-jokes that really aren’t all that funny to the world of people that aren’t up to speed with the Marvel Universe. The humor here feel more organic and less scripted. It’s a little bit more watchable without having seen the previous films.

But there are still some good bits that are a little more involved. We get a brilliant scene where everyone takes a turn trying to lift Thor’s hammer.

We get a small glimpse into Hawkeye’s (Jeremy Renner) life. It adds a little more depth to the film as we see a different side (or any side) to his character.

I don’t really like when movies open up with an action scene. It’s cliche and I’m not quite settled into the movie yet. But the effects are amazing, and so are all the other technicals.