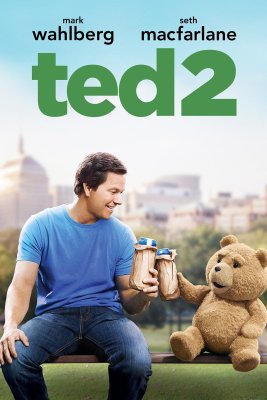 Ted 2 will satisfy most fans of the original. In great Seth MacFarlane fashion, the script is full of irreverence and a variety of joke types for every taste. We all know he is going to have inconsistency in his script–so that’s expected. In fact, I feel like he does this consciously–as I’ve expressed in my past reviews.

The film is about Ted, the talking teddy bear, and his quest to become human in the eyes of the law so that he can get married and adopt a child.

While the first film has less of a plot, it’s high-concept premise really drives the film as it acts as more of a hang-out movie. But in Ted 2, we have a plot that aims to clear up a lot of our curiosities about how the rest of the world views Ted’s existence. Despite it’s fuller story, we feel like the plot is being stretched thin much of the time–especially towards the beginning where we get an tiresome helping of Family Guy-esque interstitials to fill in space. In 2012’s Ted, there is less of a story, so there isn’t really any plot to stretch, and the concept is so new that we just want to see anything having to do with a talking teddy bear. But when we are already used to the ridiculousness and we have a premise that we want to see through to the end, it’s more obvious when there are filler scenes.

Ted 2 is equally as funny as the first movie and has just about as much heart, but it is filled with quite a few more plot holes and often times sacrifices sensibilities for a cheap laugh. Nonetheless it’s pretty enjoyable.