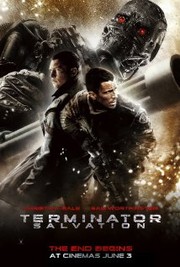 The 4th chapter in the Terminator series, Terminator Salvation, might lose the character of the franchise a bit, but it doesn’t lose the spirit, and is a necessary piece in order to continue and expand the film universe.

Here we get a weird hybrid of an origin story set in the future. John Connor (Christian Bale) is faced with Skynet’s first attempt at a cyborg with human features, Marcus (Sam Worthington). Now Connor must abandon all he knows in order to see past what Marcus actually is–a weapon constructed by his enemy.

It’s completely predictable and cliche, but it’s not without its positives. The main theme of second chances looms over our heads the whole film, but it’s an important one to say the least.

Salvation is definitely one of the more intriguing films in the series simply because it’s the first time we really get to see the future. We already sort of know what’s going to happen, but it’s that anticipation that makes is more enjoyable and we can finally see the events come to fruition that had only been talked about up until then. Without tiring out the concept, it’s necessary to see the Terminator universe in this way.

It’s safe to say that the series loses its character quality a little bit in this film. John Connor is much more serious, and so is our terminator protagonist. There’s less of the fish-out-of-water humor, as the levity is very few and far between.

But what doesn’t work more than anything is the “relationship” between Marcus and Blair (Moon Bloodgood). They share a meet-cute and are supposed to be fond of each other, but we don’t actually see any of this. Their initial connection to each other consists of scenes wasted on lusty glances in place of actually building chemistry that would have rationalized a connection between the two characters. Therefore, their relationship doesn’t make any sense, nor does it live up to its potential of really being a driving force in this film.

While I actually enjoyed Terminator Salvation, I just wish that it took some slightly different approaches.