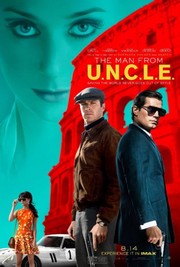 The Man From U.N.C.L.E. is based on the 1964 television series of the same name. In the film version, Henry Cavill plays Napoleon Solo–a former thief who now works for the CIA. He must save Gaby Teller (Alicia Vikander) from KGB operative, Illya Kuryakin (Armie Hammer). After reporting to his supervisor, Solo discovers that he must work together WITH Kuryakin in order to steal plans for a nuclear weapon designed by Teller’s father for the Nazis.

Despite such intriguing background stories for both Solo and Kuryakin, none of that is shown–only told. The film is intended to act as an origin story, but we only get the latter portion of the origin–the arguably more pedestrian one.

But the part that’s shown isn’t boring by nature. The plot is really creative with a few twists thrown in. However, the dialogue attempts to explain things in a slick “Guy Ritchie” manner, but instead comes off as more confusing than it needs to be.

At times, it’s hard to follow and difficult to understand who everyone is, but if you can figure it out, it’s an entertaining film.

The comedy is kept subtle in an Ocean’s Eleven kind of way, and Solo and Kuryakin’s relationship is fun to watch develop. But besides that, there isn’t much depth to it either.

The set pieces are nice to look at. We’re really immersed into the era–something that is on the list of director, Guy Ritchie’s “pros” list.

Throw in a couple of highly creative action sequences — the only ones in the movie — and you get a fairly entertaining couple of hours. But other than that, and a pretty good plot, nothing truly sets it apart from the rest of the movies you’ll see this summer–the film’s true downfall. And in a year filled with a more-than-usual helping of spy movies, this one is going to end up coming in around 4th or 5th on the list.