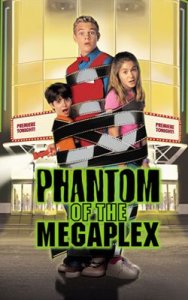 Nowadays children’s television–not the least of which, television movies–are targeted to kids in a very different way. We see kids having extraordinary abilities and powers that set them above normal kids, and much of what’s available now creates unrealistic goals for the children watching it. Gone are the days where they can watch TV and see people just like them–people who dress like them, act like them, and have similar problems. Everyone’s world on TV is perfect now, which heightens kid’s expectations for their own worlds.

With that rant aside, Phantom of the Megaplex came out on the Disney Channel in 2000–still running off the fumes created by the ’90s children’s television boom. At that time, the Disney Channel was now a network available in non-premium cable packages and had been coming out with quite a lot of original programming to compete with Nickelodeon, Fox Kids, and the like. That year, they peaked their Disney Channel Original Movie–or DCOM–production at one movie per month–the only year to date with that frequency. The years before and after gave us 8 and 10, respectively, but compared to recent trends of releasing as little as 1 DCOM in a year, even 8 gave us plenty of options. We weren’t seeing the same couple of films all year long, and we were appreciating the ones we saw when they were broadcasted.

Amidst the plethora of releases in 2000 was a Halloween-themed movie Phantom of the Megaplex, which follows a 17-year-old movie theater employee who is about to experience the craziest night of his life as the megaplex he works at is having their first red carpet premiere. Meanwhile, everything seems to be going wrong and he, along with his two younger siblings, must try to figure out who or what is causing the chaos in order to save the premiere.

Within the movie, there are several “movies” talked about and shown intermittently inside the theaters. It creates its own meta world of movies within the film universe, along with acknowledging a few masterpieces of old cinema.

This movie is far from being a technical masterpiece itself, but if you take it for what it is you will see a different experience altogether. It never tries to be perfect, which considering the alternative is fine by me. Once you get past the corny tendencies that were so common in low budget post-’90s TV movies for kids, you get a pretty entertaining film.

The pacing is a little slow in the beginning, but carries on just fine after about 20 minutes in. It provides us with a fun mystery to solve, along with the characters, and does a good job of masking who the actual phantom is.

The main issue this movie faces is that there’s never really anything at stake other than the ruining of a film premiere and maybe the fate of the characters’ jobs. Nobody’s life is threatened, or even feels threatened. It’s all just really mysterious more than anything else.

Also, the motives of the person responsible for all the mayhem don’t make much sense and are brushed off once explained.

But this film is filled with some really good messages and pays great homage to the classics of the silver screen, as well as to cinema in general–a theme that is seldom, if ever, delivered to this demographic.

Phantom of the Megaplex sparked my own love and passion for movies when I first saw it in 2000 when I was 11. It inspired me to want to see all the classics and watching it again now helps to remind me of why I started loving movies to begin with. It’s a movie I think of often whenever I may doubt my passion. Although I feel lately that film has undergone a lot of change and while I’m not a fan of modern trends in cinema, Phantom of the Megaplex rekindles the spirit of what movies should be–magic. It romanticizes cinema for me every time I watch it, and making it available to kids now will hopefully do the same for them and make them yearn for the days gone by.

“If you pay attention, movies can teach you about life.” –An actual line from a made-for-TV movie for kids.