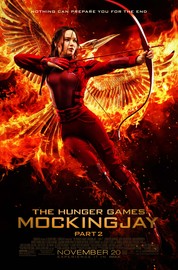 Maybe not exactly the way you’d like to top off the Hunger Game series, but in a franchise where only 50% of the movies were great, does it really matter? The sad part is this didn’t have to be the case. If Mockingjay hadn’t been spliced into two separate chapters, we would have looked at this series with only one below par entry. But now there are two.

Obviously Mockingjay Part 2 is better than Part 1 in every way possible, except for being a good substitute for sleeping pills. But this film is the ending, which we’d like to see be a little bit better.

At least if it’s been a year since you’ve watched the last Hunger Games, there isn’t much that you have to remember because nothing really happened. Basically, Peeta (Josh Hutcherson) goes crazy and strangles Katniss (Jennifer Lawrence). And in this film, Katniss et al are on a mission to attack the capital and kill Snow (Donald Sutherland). Snow expects all this, so he sets up some traps for them along the way–the highlight of the film.

Perhaps the most obvious pitfall in this movie is the tortured Katniss. Now, it isn’t Lawrence’s fault. She plays the part convincingly, but so much so that it almost hinders the film altogether. She comes off as lackadaisical and it really slows down the movie. It’s a shame though. All that depth they spent time heavily building in the previous films is wasted away in this one. She acts like a zombie the entire time–save for one powerful moment about ten minutes in when she’s intensely talking to a man who’s pointing a gun at her head. After that she’s all but absent.

What made the first two Hunger Games so good is that it separated the series from the rest of the YA genre. It was unique to itself. But a third of the way through this film, beginning with Katniss and her friends’ journey to the capital, it turns into every other dystopian teen movie–mutant creatures and all. There’s nothing original about it. There’s no moral struggle. There’s nothing making us feel like anything is at stake. And there’s really no point.

At this movie’s best, it still knows how to build tension and suspense with its action scenes–a trait last seen long ago somewhere in the 2nd film. The effects and visuals are great like always, and I appreciate the “game board” aspect being brought back too. I just wanted the film to be a better conclusion to the series.

But there is still an unresolved love triangle coming into this film. Will Katniss end up with Peeta or Gale (Liam Hemsworth)? I know this is necessary in many films directed towards teenagers, but here it’s not only unnecessary, but it gives the series less credibility–especially considering the forced nature of the conflict. There’s never anything really separating the two guys. She has no real reason to choose one over the other, which then forces a decision to come down to mere physical preference–a trait that openly welcomes a younger, more naive demographic–the demographic that will rid this movie of all credibility. In most love triangles, the two lovers are opposing archetypes–Han Solo and Luke Skywalker in Star Wars, Brad Pitt and Edward Norton’s characters in Fight Club, and even Edward and Jacob in Twilight–but here, the two men are basically just the same nice guy. We never feel like she can realistically make a decision. We can’t either. And I think the filmmakers knew this, which is why they abruptly give us a reason not to like one of them with about 10 minutes left in the entire series. It’s really the first sign of differentiation between the two male leads. And so it goes, the decision is pretty much made for Katniss. But it has to be, seeing as they’re the same person, which makes everything that happened in the previous four films feel like a total waste of time.

In Harry Potter, the series never focuses too heavily on the romance between the characters. While Mockingjay Part 2 is still deeper than most other YA films, the love triangle distracts from the overall point of the series, which is the last thing you want as the franchise wraps itself up. It was just too strong in this one.

As the film ends, it never really climaxes–it just tapers off. Oh yeah, we get a betrayal from a character which no one cares about since the character just got introduced to us in the last movie and we got no time to get to know them. There’s no sense of shock or betrayal that a good twist would have given us.

It seems like I hate this installment, although it’s actually entertaining–much unlike Part 1. But overall, the film is way too into itself, presumably due to the hype that it’s gained since its inception back in 2012. As a standalone movie, Part 2 has all the thrills you would need, but in the context of this series it makes us realize that we would have been fine wrapping it up after the 2nd film.