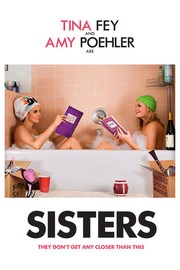 Amy Poehler and Tina Fey have always had great chemistry. We know this. Put them in anything to make it work? They try this. It’s usually hit or miss. I’ve always been on the fence about the two. And I was hesitant to see Sisters this soon out the gate, but I wanted to go to the movies tonight and it was the only thing playing.

The film follows two 40-something-year-old sisters (Fey and Poehler) on the brink of their parents selling their childhood home. With the sadness of losing all the memories they’ve compiled during their youth, the sisters plan to throw one last party at the house in spite of their parents. They invite all of their old high school classmates and the party turns into a wild rager as the two plan to get crazy.

I admit, however, it gets pretty funny. It’s my type of humor. And after watching Daddy’s Home, I needed a solid comedy. It doesn’t pull any punches and takes plenty of risks. But it also feels like they display every single idea that was on the drawing board. Literally, this movie is jam packed with so many concepts. It has a very “trying stuff out” feel to it, which isn’t necessarily a bad thing. It’s just, at times it gets odd and tends to shift the tone around–another side effect from the full-drawing-board strategy. But in a nearly 2-hour comedy with a not-so-hefty premise, they have tons of room to trim the fat.

But perhaps the film’s biggest pitfall is that Fey and Poehler always seem to keep almost laughing at themselves. Like they know the cameras are on. They’re having too much fun just being together and joking around. Sure, comedy can be obviously unrealistic, but you still want the characters in the movie to believe what they’re saying and doing. You want them to commit to their jokes as though THEY’RE being serious.

The premise is a little weak and the characters’ motives are tenuous, but there’s a certain ’80s nostalgia that’s underlying the whole deal. Not a whole lot happens, but it never loses momentum while keeping your attention throughout.