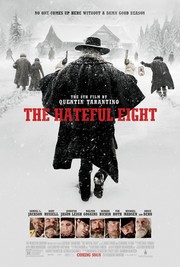 Don’t go into this Quentin Tarantino film and expect it not to be over-the-top bloody. In fact, after the first hour and a half, you think maybe it’s not going to be. Guess again. Perhaps Tarantino does this to create suspense during a time in the movie where tension comes merely from his captivating dialogue.

Like a Steinbeck novel, taking several pages to paint the scene and get to know the situation in order to make it live in our heads, The Hateful Eight doesn’t rush anything. Some may not like this approach, but it’s done in order for us to live in the world that has been created.

The pacing starts off slower than usual, but builds at a consistent pace. Every word that is spoken is positioned very carefully. This is what Tarantino shines at. He doesn’t make boring dialogue and he doesn’t waste pages. If he makes a three hour movie, it’s going to be for a reason.

The Hateful Eight is a western mystery in the style of Reservoir Dogs. Kurt Russell plays a bounty hunter who is bringing his prisoner, Daisy (Jennifer Jason Leigh), to the town of Red Rock for her to be hanged. Along the way, he picks up Marquis (Samuel L. Jackson), another bounty hunter who soon becomes the main protagonist of the film.

Jackson is always at his very best when teamed up with Tarantino–a fact that has been proven time and time again. His tumult matches up perfectly with the director’s exploitation style of filmmaking.

Leigh’s performance might be this year’s best. She does an incredible job, and without saying much, controls the tone of the entire film with her insanely believable machination. You stop and ask yourself if they picked up the actress from the loony bin before filming.

Everything is perfect, from the camerawork to the set pieces to the enthralling musical score. I attended the 70mm Roadshow screening, which is a unique experience in itself, fully equipped with a large program and a 10-minute intermission.

If you like Tarantino, you will surely like this movie, but if you’re not a fan of his gruesome flair, then be warned that this one is probably his most violent.

It doesn’t have quite the same impact as, say, Tarantino’s Inglorious Basterds or Django Unchained, but it’s refreshing to see a neo-Western done so simply, yet not by-the-numbers. It might not be the story you were hoping for following his previous two, but as far as filmmaking goes, The Hateful Eight may be the year’s most solid selection.