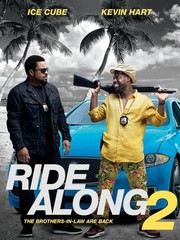 Kevin Hart is an interesting case. He’s hilariously funny when it comes to his standup. But filmmakers have yet to figure out what to do with him in film. With his best performances being Think Like a Man and Get Hard, you start to think about what they did right. Think Like a Man’s strength is that it doesn’t hyper focus on any one of its well-balanced leads. And with Get Hard–both Hart’s and Will Ferrell’s best films in awhile–you have to credit the fact that they both get to take the stage. They both act as the straight man AND the comic foil. But after a failed attempt the first time around, we are offered a second installment in the Ride Along series.

The original Ride Along from 2014 already had audiences feeling like it was just an excuse to make a movie where Hart acts ridiculous, much to Ice Cube’s unamusement. And this one is no different. The sequel has a slightly better storyline than its predecessor, but not by much. It copies a lot of the formula from the original.

In this movie, Hart plays Ben, a preliminary detective about to get married. His brother-in-law-to-be, head detective James (Cube), takes him along on a case in Miami to show Ben how he isn’t cut out to be in the field.

Hackneyed comedy isn’t the only thing that’s cliche about this film. Overused tropes are flying left and right. From every one of Ice Cube’s foreseen reactions, to the typical action movie lines: “[Villain] is hosting a party tonight at his mansion. Everyone’s expected to be there” or “I’ll distract him while you go in.”

There are a few laughs scattered throughout. The opening sequence, featuring Tyrese and a bunch of street racers, is the best part of the movie. But Hart just doesn’t have anyone to play off of comedically the rest of the way. It’s just him doing all the romping. The few moments he has with Ken Jeong are nice, but that’s about it. Ice Cube is his definite straight man. And a pretty good one too, as evident with the Jump Street series. But the truth is, Hart is so over-the-top all the time that he almost doesn’t even need a straight man. It’s already extremely obvious he’s being ridiculous that it’s nearly insulting that we need someone else to point it out too. When everything around him is too serious, Hart’s antics become less believable.

There’s nothing definitively bad about this film. It hits all its marks. Almost too well. And that’s what makes it blend in with the crowd. This by-the-numbers comedy may not be painful, but it’s definitely forgettable.