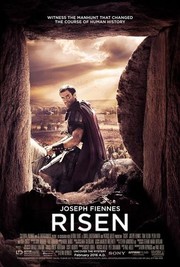 To provide a totally new point of view for an extremely well known story is not only unique, but incredibly welcomed. It sure serves this Biblical-themed film well, as we get an entirely different perspective of the resurrection of Christ.

Pontius Pilate’s right hand man, Clavius (Joseph Fiennes), must oversee the death of Jesus (Cliff Curtis) on the cross, as well as his rumored rising from the dead. The latter of which is insisted upon out of fear from the Jewish high priest.

In most Christian-influenced films, these antagonists-turned-protagonists already have a good-guy demeanor about them from the very start. You know he’s going to have a change of heart, and it’s just not believable that he would be that bad of a person. Fiennes totally bashes all of those stereotypes. His adamance is true in the beginning, and so is his conversion.

If you haven’t seen the movie yet, or are really bad at figuring out what’s going to happen, then stop reading. But what Risen does best is not making everything so black and white. Clavius isn’t 100% gung-ho with this whole discipleship by the end. He’s heading that direction, but he’s still processing things. He just saw a guy come back from the dead, for Heaven’s sake! (Pun intended).

While most faith-based films are very serious–often times taking themselves a little too serious–Risen has a bit more levity. Not too much as to alienate its truest followers, but just enough to grab the attention of the more indifferent. And the jokes aren’t corny at all. In fact, they’re always very much deserved each time.

If you think this film will be boring, you are mistaken. It’s spiritual with good moral direction, but also comes fully equipped with chase scenes and gumshoe tropes. After all, Clavius is doing all that he can find a dead body that’s gone missing.

Risen hearkens back to the classic Biblical epics of Hollywood’s golden age–in a positive way only–without ever losing its fresh sensibilities. But unlike those old movies, this film knows what it’s doing at all times–even when it comes down to the race of each character. It doesn’t just throw a bunch of stereotypes at you. Everything is happening for a purpose.

The filmmakers know that most of its audience isn’t going to be so credulous–and don’t want them to be–so what we get is a brilliant reification of historical events to the point that even the most doubtful viewer may stop and reconsider.