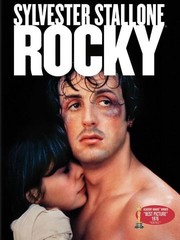 What most people don’t realize is that Rocky isn’t so much of a boxing movie as it is a love story. Well, that’s what I got from it, anyway. The boxing is a big part of it, but we don’t even get to the real meat of that story until about an hour in. And without even realizing it, we’re getting a whole lot of character depth during the first half of the film.

Forget the creepy way that Rocky forces Adrian to give him that first kiss. The story as a whole is sweet. She’s a true diamond in the rough. It’s almost not even believable at first, but the two have so much chemistry that it works.

But like most of the movie, their relationship is without much conflict. Rocky doesn’t overcome any crazy obstacles. He’s a lazy boxer who hasn’t made anything of his life, and when some freak opportunity presents itself, he finally works hard and gets what he wants. There isn’t anything really standing in his way. Perhaps if they threw some conflict in there it may come off as contrived, but how it is now, it seems too easy. Maybe that’s the point. I don’t know.

Undefeated heavyweight champion, Apollo Creed (Carl Weathers) needs a new opponent for the title fight after his current one drops out. But he wants this new competitor to be a no name amateur, so that the public will get into the underdog story.

And it’s a good underdog story at that. You root for Rocky undeniably. But there could just be a little more in terms of a struggle. The biggest risk he takes is handed to him. And what does he have to lose, anyway?

Much of the film is dated with the fake punches and the already antiquated dialogue. There are points where the patter is so rhythmic that it sounds like it’s from the ’40s or ’50s. It’s a slow moving film, and some scenes just drag on for way too long. It helps add to the character development, but it does a number on our attention span.

Then there’s predictability. The end result is telegraphed from a mile away. We can guess what’s going to happen for most of the film. And we are usually proven right–another side effect of there not being any unexpected drama.

Nowadays, we have a quixotical view of Rocky, the all-American hero. Even the Academy was lost in its gaze with this film winning Best Picture back in 1977. But sadly, it’s not as good as we want it to be. But that’s not to say it’s not good. It’s still a cool underdog story, albeit not paying off as well as its predictability wants it to. However, corniness aside, this film set the pace for countless stories that came after it. And most of all, it has a lot of heart. You can’t knock it for that.