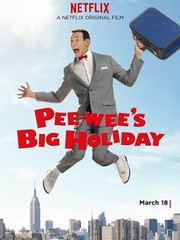 Pee-Wee’s Big Adventure is one of my all-time favorites, so I’ve been looking forward to this one for awhile.

From the very opening of the film, we already get a sense that this will take place in a similar realm of surrealism that was used in the 1985 classic. It’s a different film universe from Big Adventure, but it gives us the same tone. From Pee-Wee’s love for Rube Goldberg-style housing, to the utopian town that he lives in–Fairville–which is populated by less than 1000 residents. It all hearkens back to Tim Burton’s vision from the original. But the comparisons don’t end in Fairville. The whole film tries to mimic what worked so well in the first movie–which is a good thing.

Pee-Wee has never left Fairville before. In fact, I’m not sure anyone really has. So, much like Big Adventure, Pee-Wee sets out on a cross-country road trip with inspiration from Joe Manganiello–playing a fictionalized version of himself who just so happens to be the cool-guy version of Pee-Wee. You wish for more scenes with the two of them because they oddly have great chemistry with each other.

There may not be as many iconic scenes as there are in Pee-Wee’s Big Adventure, but the ride is just as entertaining. The silliness is still there, even if the lines aren’t quite as memorable. But that’s what Pee-Wee’s all about. His world is meant for us to lose ourselves in. To find that place of innocence and imagination that many of us left with our childhood.

In 2016, Paul Reubens’ vision for Pee-Wee still holds up. Not much has changed. There are points in the film where you forget that this is a new project.

This is truly amazing day for Pee-Wee fans. Hopefully this won’t be the last we see of him for another 25 years. He was a big part of my childhood and it’s great to see a new generation getting to know the world’s most beloved man-child.