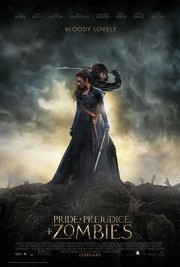 Most people are probably thinking, “If they pull this off, it could really be great!” And they’re right. The unfortunate part is that it’s fairly difficult.

My only true frame of reference is the 2005 film version of the Jane Austen classic. And while it’s not my favorite film of all time, I can’t deny its technical achievements.

This one has completely different achievements. If you’re talking about special effects and makeup, then Pride and Prejudice and Zombies is accomplished, sure. But the problems lie in the story itself.

The film starts out as a true black comedy. Taking place in the early 1800s, you see quaint young English women preparing their weapons for battling the undead. But first they must brush each other’s hair. It’s that sort of humor that runs rampant throughout much of the first act of this film. And it’s much appreciated. It’s not two stories at once, but the classic Austen story featuring a zombie subtext.

Though, the irony is only entertaining for so long. Then it reaches a point where everything seems forced, and then the dialogue becomes rushed. It just goes through the motions in order to execute both ideas. The long runtime works for the 2005 version, but this one just tries to cover way too much ground in about 30 minutes less.

And it’s as though the filmmakers realize that too. So they change it up a bit. 45 minutes into the film we finally get more of the zombie action that we’ve been wanting. It starts getting good, but then the whole love story suffers because of it. If you can look past the massively uneven tone, you’ll tend to enjoy what makes this story unique.

The casting here is pretty good. The chemistry between all the lovers isn’t quite there, but Lily James is more than acceptable as Elizabeth Bennet. Although, it’s almost humorous to believe that she’s supposed to be the less beautiful daughter between herself and Jane.

If you’ve never been exposed to the original Jane Austen story before, then you may not even get the humor or, better yet, the story in this one. However, the adjustments made to the classic tale in order to fit into this zombie adaptation actually cause parts of the story to make more sense.

Pride and Prejudice and Zombies isn’t a bad movie. It’s actually quite entertaining at times. And It’s not that they failed in what they set out to do, I just simply think it’s not possible to accomplish the daunting task of combining the two stories. Perhaps it merely has too much to handle in order to have the freedom to be its own movie.