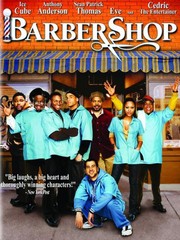 There are a lot of experiences that young men should have growing up. Being exposed to the barbershop culture is one of them. I loved going to get my haircut when I was a teenager. Not just because I felt rejuvenated with my fresh cut, but because I enjoyed the banter, the stories, and even the superfluous arguments. It’s something I still look forward to when I go get a trim. And it’s captured perfectly in this 2002 Ice Cube comedy.

The story isn’t anything too intricate. It surrounds Cube’s character, Calvin, trying to decide whether or not he should sell the barbershop passed on to him by his late father. But most of the film is spent filling us in on the happenings of the employees and patrons of the shop, and their own stories. By far the most interesting part, we get a great sense of who these people are and what makes them tick. We feel like we’re right there in the shop with them.

It has its fair share of broad comedy, but there aren’t a lot of moments of subtle humor. Which is okay, since it does the former so well. While it’s rarely hysterical, you can definitely appreciate the repartee. In fact, most of the highlights don’t come from the barbershop at all, but from Anthony Anderson and Lahmard Tate’s characters stealing and attempting to open an ATM machine. This subplot goes on throughout the entire film.

With an impressive cast and an even more impressive Ice Cube, the beauty of this film is in its characters. They’re not all likable, but you get to know them well enough to understand them. It’s deceptively deep.

Ultimately, Barbershop turns a very simple premise into something much bigger and more meaningful. And it does it without ever feeling like it’s being stretched too thin.

Although it’s not perfect, it’s perhaps one of the most accurate portrayals of a culture so beloved by American males.