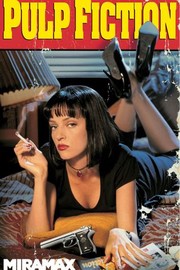 If a piece of art is highly influential, does it make that piece of art good? Yeah, probably–great, even. But it doesn’t necessarily mean everyone has to like it.

Intermixing and connecting four stories, the film compares and contrasts all different types of low-level scums of the earth.

In Pulp Fiction, the dialogue is superb–near perfect. Quentin Tarantino’s direction is that of ridiculously mind-numbing proportions. The cinematography is truly something else. Not to mention, groundbreaking on so many different levels–replicated infinitely.

But just because it’s groundbreaking, doesn’t mean it has to be my favorite film.

Perhaps this has something to do with all the hype I’ve been hearing my whole life about how it’s the greatest film of our lifetime–of ALL time. But I wanted to love it. I expected to love it!

And although I didn’t love it necessarily. I liked it–a lot. Tarantino might just be my favorite director. I think he’s the greatest auteur of our generation. Each film of his I’ve seen has inspired me even more in my own writing and artistry.

What I like about Inglorious Basterds, Django Unchained, and even Reservoir Dogs, is the sense of grandeur and importance. They all command your attention with mere dialogue in ways that most mainstream action blockbuster flicks never will.

And Pulp Fiction is engaging in that same way. But it differs from those other Tarantino films in one particular way: It’s mostly much ado about nothing. I get that it’s supposed to pose as commentary on the state of the film industry and mimic countless classics that have gone before it. But too often does Pulp Fiction take its sweet time getting to the point. That’s Tarantino’s style with his hard-hitting dialogue–which I find entertaining. But if there is no point (or no point of any substantial value) then all that dialogue gives us just that–entertainment.

Which I’m all for. Some of my favorite films are meaningless is the grand scheme of things. But in those films, I care deeply about the characters. I relate to them. I root for them. Here, I’m not sure who I root for, if anybody. But maybe that’s the point, too.

The nonlinear story is cool, and is brought back to popularity with this movie, but definitely not the most interesting I’ve seen in cinema. On the other hand, watching the stories unfold is. Never knowing what’s coming around the corner or which characters to trust or like. Tarantino gets the absolute best performances out of his talent–Samuel L. Jackson above all else.

The best scene is when John Travolta and Uma Thurman venture to a 1950s-themed diner. Every employee there is a caricature of some ’50s icon. Which is a curious thing since this film pays homage to countless zeitgeists of yesteryear, but almost none of them are from the 1950s.

Perhaps its groundbreakingness is partially due to massively exposing the world to Tarantino and proving that he wasn’t just a one-hit-wonder with Reservoir Dogs. That his style is here to stay.

The movie is exploitation that critics reaffirm as high-quality, while also changing the game for independent films, making it okay for A-listers to appear in these lower budget productions.

But like I said, I also have to credit it to its technical accomplishments. And the fact that it’s thoroughly and consistently engaging.

Pulp Fiction is an amazing film. Perhaps Tarantino’s greatest artistic accomplishment. But one that I could watch over and over? It’s not even my favorite Tarantino film.