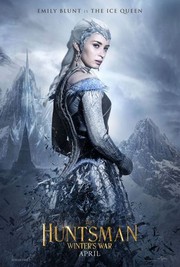 If you’re one of the people who thought there needed to be a sequel to a film that was already adding nothing really new to the lore of Snow White, then at least you saw the first film. If you didn’t see the first film, then you’re in luck because you don’t have to. Not in order to watch this one. This prequel/sequel is only cosmetically related to 2012’s Snow White and the Huntsman.

I mean that in both a good way and a bad way. The two films share some of the same cast–Chris Hemsworth, Charlize Theron, Nick Frost–but feels weighed down by the fact that its predecessor wasn’t at all as amazing as its trailer lead us to believe.

But let’s, for a moment, judge this movie solely on its own being, and not based on how necessary it is or the demerits of that which came before it.

The first installment ends the same way all Snow White adaptations end, except for an ambiguous love story between Snow White and Eric the Huntsman (Hemsworth).

Snow White isn’t in this movie though. She’s mentioned and silhouetted, but basically omitted. Which is fine. She was probably the worst part of the first one anyway.

Even better, we get a couple of nice additions to the cast in Emily Blunt and Jessica Chastain–both of whom do a superb job in their respective roles of the evil Snow Queen and Sara, the huntsman’s wife.

When I say this installment acts as a prequel AND a sequel, it means it shows the origins of how Eric becomes the huntsman and how he meets Sara, but then flashes forward 7 years after she dies (we know this from the first film).

The sequel portion of the story has the huntsman setting out on a journey to find the magic mirror, which Snow White sends away after it starts making her go crazy and homicidal. This is where the plot gets hairy. It’s never clear why the mirror is making her mad, nor how she has the willpower to send it away, nor why the huntsman needs to retrieve it even though Snow White wants it gone to begin with.

The magic mirror is a MacGuffin in the worst sense. Not only do we not need it as a plot device, but we’re not even really sure why it’s a plot device. There could’ve been a more sensible reason for Eric and the dwarves to set out on their quest.

The action sequences are, at times, ridiculous and silly–over-saturated with shaky cam so we’ll just accept what’s happening on screen. But the thing is, we would’ve been just as fine without the queasiness.

There’s plenty of levity from the dwarves, played by Frost and Rob Brydon. The jokes are a fairly even mixture of both hits and misses. But it’s okay, at least it keeps the movie fun and not too self-aggrandizing. That is, until it wants to be self-aggrandizing. Jarring tonal shifts and an overly jokey Hemsworth all of a sudden make us confused about what feel we’re supposed to be getting.

Truth is, I can’t think of a good enough reason to hate this movie. It’s far from perfect, but I find it fairly entertaining. There’s a lot of meandering somewhere in the middle of the story. The journey to the mirror isn’t half as exciting as it should be. Nonetheless, The Huntsman tops its predecessor, not on essentiality, but on a unique premise.