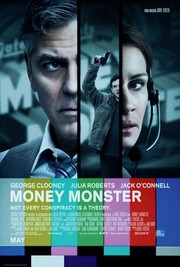 It’s a common theme in films that Wall Street is largely corrupt. We’ve seen it played out countless times. Especially lately. And many of these films mesh together to become indistinguishable from each other. Money Monster may feel different. But is it maybe due to the ridiculously large ad campaign or because it says things that the others don’t?

The former is most likely true, but it doesn’t mean this film should be tossed aside. There’s a lot to like about it.

George Clooney plays Lee Gates, the host of a stock market show where he advises people on what to stocks to buy and sell. In one situation, he advises everyone to buy shares of a specific company, saying it’s a surefire bet. So many viewers do, but when the company’s stock plummets, costing investors $800 million, everyone wants answers.

Most specifically, a young man named Kyle (Jack O’Connell), who sneaks onto the show’s set and threatens everyone. Flailing a gun around and strapping a bomb around Gates’ chest, he goes into a rant about losing his entire $60,000 life savings on the company because of Gates’ advice.

Kyle and the script have a lot to say, but never quite hit the nail on the head in a grand way. It’s well thought out, but doesn’t play as so, instead giving us popcorn thrills and adrenaline rushes. Which, by no means, is a bad thing.

Bordering on transparent and cheesy a few times, its wittiness jumps back out of it quickly–and fortunately.

At a little over 90 minutes, the film is paced well. It keeps us awake on the edge of our seats pretty much the whole time, which is interesting considering almost the whole thing takes place on a television set with just a couple of people.

This may have to do with the fact that the point of view is all over the place–an odd decision for a thriller. We see what the filmmakers conveniently need us to see–not always what makes sense for us to.

Though not as big or impactful as it wants to be, it stands as a microcosm of the financial stresses most of the country is constantly going through. It’s an important movie, but there are others that are slightly more important. Although, it doesn’t hurt to watch this one and be thoroughly entertained in the process.