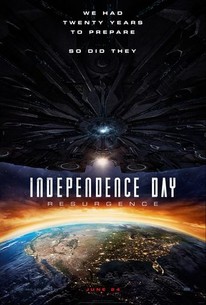 In 1996, we didn’t have a whole lot of alien invasion movies. In fact, Independence Day was, by far, the biggest one ever in existence. It prided itself on it. And you could say it started an avalanche of similar genre films in the 20 years since its release. So, naturally, the sequel needed to be much much bigger. Luckily, it delivers.

The new alien ship spans an entire continent, and Earth’s existence is much more threatened this time around. It turns out that the same aliens from the last movie are back to annihilate our planet.

Like the first film, there are a handful of story lines. Many people banning together for a common cause. While not helping fix the depth issue of these movies, that’s how we would need to do it in real life. Especially for an attack of this magnitude.

But what helps continue the original realism from the first film is slightly negated by the futuristic feel from the get-go. Drones hover around an ultramodern Washington D.C. and there is an entire group of military personnel living on the Moon. While 1996 felt like 1996, 2016 is more along the lines of Back to the Future Part 2.

While the action is big, the CGI feels very unoriginal and uninspired.

But that’s all forgivable. What’s not is the convoluted premise. It may not seem to matter. We get, more or less, that there’s a big alien trying to wipe out our race, but we’re unsure why it’s happening, how it’s different from the first film, and why anyone in the movie knows what they know.

Oh, and the acting is horrendous. Will Smith’s stepson, Dylan, from the original is all grown up now, following in Smith’s footsteps as a military pilot, and someone must’ve informed him to utilize his entire face when delivering each line. He gives his own version of the Bill Pullman speech from 1996. It’s awful. He’s not the actor who played the role in the original. But at this point, they might as well have just hired the same guy. This current actor has no obvious benefit over the first. Maybe it’s because he’s good-looking? Yeah, that’s important.

The rest of his cohorts are almost just as bad. They’re obviously hired for their appearances, rather than their acting abilities. And the dialogue is already dumbed-down way before they get their fidgety little hands on it. The depth created for these characters is contrived just to reel in the kids. But the acting is just unacceptable–even for such a large scale movie.

Will Smith isn’t in this one. Don’t even bother expecting him to make a surprise appearance. You may think, “He’s too integral to the enjoyment of the first film not to be in this one.” And you’d be right. It’s like Chris Tucker not being in Next Friday.

Hirsch brings some much needed life to this film. His storyline is the least important, but the most engaging out of the whole thing.

The film’s faults fortunately give it a really corny ’90s feel, which, at the very least, makes this film fun. And the momentum builds well, so we can actually enjoy ourselves.

The individual pieces in this film shouldn’t make up an impressive project. But somehow, the small instances of light shine through and are just good enough to make this movie watchable. But ultimately, this film shouldn’t depend on a few scenes by two actors to make it so.