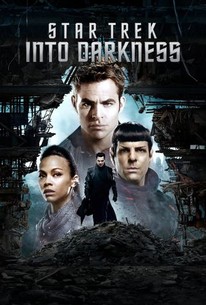 The fact that it doesn’t have the unique reboot premise of its predecessor almost alone makes Star Trek Into Darkness just as impressive.

It doesn’t have time travel, but it does have ridiculously awesome action sequences and a lot of jaw dropping visuals.

This time around, Captain Kirk, Spock, and the crew must face the killing machine, Khan, played by the always-macabre, Benedict Cumberbatch.

What’s at stake here may not be as catastrophic as the 2009 film either, but you wouldn’t know otherwise. It provides an interesting and detailed story without a complicated or convoluted narrative–sucking us right in.

The jokes are kept appropriate to the situations. They’re never forced or too comic-booky. The film is fun without ever resorting to silliness, which is common among this reboot franchise. It tends to avoid the Avengers route. The quips are delivered with conviction and the banter usually comes from a place of stress, providing just the right amount of levity.

2009’s Star Trek mostly blind-sided us. Fanboys were shocked at how awesome it was, and non-fans were surprised at how much they loved it. This one didn’t have as much to prove, but it delivered regardless, giving us 132 minutes of gripping story, compelling characters, and near-perfect pacing. I’d say it did just fine.