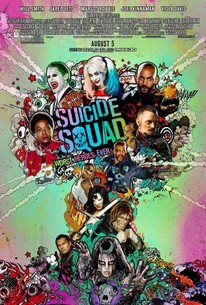 My first thought when going to see this movie was, “It’s not rated ‘R’??” It’s such a dark and macabre film. A superhero movie to change all the rules of superhero movies. And while it almost does, it’s difficult to do so when you go for a PG-13 rating. Although, I understand why. Widening your audience means more butts in the seats. And those who would want it to be rated R will probably still think it’s rated R.

After the death of Superman, US intelligence agent, Amanda Waller (Viola Davis), wants to put together a team of criminals to go on dangerous missions at no risk, since they’re seen as expendable.

Of the ensemble cast, the bigger names consist of Will Smith as the hit man, Deadshot, Margot Robbie as The Joker’s girlfriend, Harley Quinn, and Jared Leto as The Joker, himself.

I’d like to preface this all by saying I enjoyed the film. It’s not terrible. I’d watch it again, and probably even buy it on DVD. It does a lot of things right, but it’s not without its fair share of hiccups.

You can’t help but notice that the DC cinematic universe is always playing catch-up to the Marvel one. And it doesn’t have to. This was its chance to do something totally different. And in some ways it does–or at least, sets itself up to in the future. But the random interjections of jokes amidst action scenes don’t feel fluid, but forced. DC is supposed to be much darker and less tongue-in-cheek. Less quippy.

DC, in some sense, has far more interesting and unique characters–especially villains–than Marvel. They’ve grown to be more twisted over the years, and this film tries to use that to its advantage, but it just doesn’t always work.

That’s not to say it never does. This year’s Batman v Superman film uses cheesy filters to make it feel dark. In Suicide Squad it’s more convincing. It’s dark. Really dark. But you can’t help feel like the film is torn between sinister and cartoony. Christopher Nolan’s Dark Knight trilogy succeeds at this perfectly. But Suicide Squad is trying to be both Dark Knight and Avengers at the same time. I’m not so sure that’s possible.

It could have benefitted from being more serious. The film starts out comfortably fitting into its own universe, but the random bits of levity are often jarring, making it seem like the film is trying to be as appealing to its more popular contemporary. Yet, it never has to. The material is great on its own. And we won’t blame writer-director David Ayer, because apparently, it was the studio who demanded there be more humor scattered throughout.

This is what Marvel does very well. In the Avengers films, entire scenes don’t come to a grinding halt whenever Iron Man says something funny. The humor blends into the action. It doesn’t combat it. Here, the action scenes were the only times the film was free of jokes.

And we don’t mind levity. However, in this scenario, the jokes should have been darker–not cuter. But with Robbie delivering them, that’s what you get.

They seem to want her to be the focal point of the laughs, but I just wanted her to stop. You don’t always buy in to her jokes, and she just ends up getting annoying. Smith, however, is the unsung comedic talent of the film. His timing is as good as ever and it never feels forced–fitting into the Marvel vibe they’re going for.

Leto as The Joker was perfect because he wasn’t overexposed. Every time we see him, he’s gone moments later, making us want more. Robbie is in almost the entire film. You’re supposed to love her antihero, but you never really do. Not enough is given to us. We end up just feeling indifferent.

There’s a scene towards the beginning of the film where Davis’ character is sitting down at a table, explaining one-by-one the backstory of each character. it takes about 10 minutes and freezes any plot progression that’s going on. The normal version of me would have hated this in any other situation, but it may be the best part of this movie. We’re being introduced to these interesting, complex, deranged characters. We get get excited about what’s to come. The filmmakers want us to fall in love with these antiheroes, but this is the only time it truly lets us.

Despite the lack of action sequences, the pacing’s fairly good, and the film is entertaining everywhere else. However, it has a long way to go to be considered great.

I really want these new DC films to be of the best quality, but I fear that they can’t. Not as long as they’re too preoccupied with trying to be Marvel. Honestly, if I never saw another Marvel film again, I wouldn’t be devastated. It’s time for something new, and DC can give us that. They almost had it here.