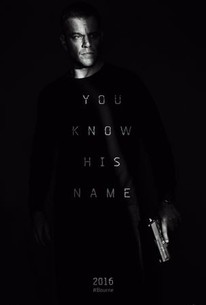 Being a fan of the Bourne series may or may not determine whether you like this new installment. Jason Bourne (the film) boasts much of the same formula from the series’ first 3 films, yet doesn’t give us a whole lot of new direction.

We left off in the last one with Jason Bourne (Matt Damon) finding out his real name and finally remembering joining the Treadstone program. Here, it’s 10 years later and he’s been living off the grid. Resurfacing for miscellaneous reasons, he’s now trying to figure out even more about his past.

This one offers us something that the previous films don’t really give us: a twist. It’s a pretty decent one, too.

We also get some interesting new characters. A CIA director, Robert Dewey, played by the always-respectable Tommy Lee Jones. Jones gives us a CIA villain to truly despise. He’s so believably evil, that he makes the film just about as much as Damon does.

And while director Paul Greengrass creates a film that could be mistaken for any one of its predecessors (which is a good thing), we’re hoping for a little bit more than just finding out more about Jason Bourne’s past–something that could probably have been covered in The Bourne Ultimatum.

It’s not that Bourne’s character has no depth, it’s just that we’ve already seen it all in the previous 3 films. There’s not much left to discover about his personality. And basically nothing new added here.

Oh yeah, and there was this whole fourth movie featuring Jeremy Renner, called The Bourne Legacy, which was basically not touched on at all in this film. The thing I was most excited about was getting a follow-up to a cliffhanger-filled movie.

But we don’t. However, one can still hope that this sets up a neat tie-in between the two stories.

There is one moment, however, where we actually consider that Jason Bourne’s death is possible. It’s probably the only moment (besides the end of Ultimatum) where we think this.

Though many might consider this new film unnecessary, it’s still just about as entertaining as the best unnecessary films out there.