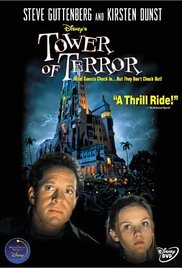 Fun Fact: This is the first film based on a Disney theme park ride.

I remember watching this movie on TV as a kid and loving it. But I’ve discovered, upon recently rewatching other Halloween movies from my childhood, that many times they’re not as good as I used to think. So naturally, I had the same concerns with 1997’s made-for-TV movie Tower of Terror.

And at first, I thought my worries were coming true. The film does a poor job when trying to force character depth. The dialogue gets clunky and self-aggrandizing. The film doesn’t truly shine until it happens organically.

Steve Guttenberg plays Buzzy, a former newspaper writer, who has lost all his credibility after a story he published turned out to be fake. So he turns to writing tabloid stories instead. He’s approached by Abigail Gregory, an old lady who claims to know how child actress Sally Shine (Lindsay Ridgeway), and others, disappeared one night back in 1939 at the Hollywood Tower Hotel. She claims that Shine’s nanny used dark magic to trap the young starlet’s soul in limbo. Guttenberg thinks he might have a story on his hands and visits the abandoned hotel to investigate.

Guttenberg lacks a convincing performance, but he still gives us some nice wit. As the movie’s lead, he’s affable enough. But it’s the others around him that shine a little more. Kirsten Dunst as his niece, Anna, provides solid support, but the five actors who play the hotel’s ghosts give us some of the film’s best moments.

What the movie does best is craft a fine mystery surrounding the strange 1939 accident and makes us care about its victims–who are all minor-to-supporting characters–but it just fails to keep us interested in its actual leads.

However, it’s truly a fun Halloween movie. One of my favorites for this time of year. Kids will love it. It’s not too scary, but eerie enough to pique their interest. And it holds up pretty well, giving adults a very cool story to follow with blindsiding twists. It’s definitely as entertaining as I remember.