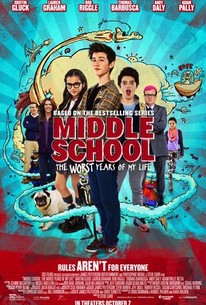 As I’ve said a thousand times before, the lack of live-action comedies for the younger members of our society saddens me. In the ’90s, when I grew up, you couldn’t get away from them. It was awesome. But nowadays, pre-teens’ only options for movies are of the superhero variety. Or some other big budget franchise. Unless they merely want to watch animated films with characters that aren’t human. And I’m not knocking computer animation. It’s just that during a time when empathy is getting further and further away, it’s nice for kids to see “tangible” characters that they can actually relate to.

And there have been some good live-action options for kids semi-lately. The Diary of a Wimpy Kid series, for example, was perfect. But many others dumb themselves down for children. And when this happens, you lose the parents as well.

Middle School isn’t like that. It’s full of quality humor and an engaging storyline that will find both kids and adults laughing out loud–the latter might even be surprised with how much they like it.

The film follows Rafe (Griffin Gluck), a middle schooler who’s been inexplicably kicked out of his previous two schools. His active imagination, along with problems with authority, get him into trouble. Especially at his new school, where the principal (Andrew Daly) acts as a warden, creating asinine rules. The kids aren’t allowed to talk in the hallways, wear colorful clothes, or even draw pictures.

Rafe isn’t having any of this nonsense and wages a war with his principal in a Home Alone-type of way. It’s highly entertaining seeing what he comes up with and how his life progresses with those around him, including his best friend, Leo (Thomas Barbusca), his sister Georgia (Alexa Nisenson), and his cool insouciant teacher, Mr. Teller (Adam Pally).

And with the quality talents of Rob Riggle, who plays Rafe’s borderline-abusive future stepfather, and Daly, Middle School has humor for young and old.

Yeah, the script has some issues with a couple of jarring tonal shifts, but it also refreshingly surprises us when we least expect it.

I have a hard time knocking a film that does its job. It never talks down to kids–in fact, it gets kids all too well. There isn’t some over-exaggeration of how much they use their phones. Even the banter feels lifelike. It speaks to adolescents who are at that “middle” stage between childhood and responsibility-hood. It’s a fun time that most of us took for granted. But Middle School pleasantly brings us back so we can live it over again with Rafe–in a stunningly committed first-person narrative.

This film isn’t just going through the motions, folks. There’s a lot of genuine intent throughout. Plot points and jokes that are obviously very well meditated upon. While sitting and watching this movie, I legitimately thought to myself, “This isn’t just a moneymaker for them–they actually want it to be good.”

Even if it were among the other classic live-action kid films of yesteryear, I would still go out of my way to watch it. I wish I had this movie when I was growing up. But at least I have it now.