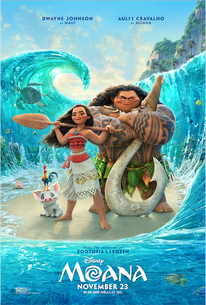 In recent years it seems like digital animation is becoming more and more advanced with each movie being released. But the changes are gradual and often expected. We talk about how the scenery looks just like a photograph, or how animals look like they could be real. However, actual humanity is the one thing that seems to be taking the longest to become lifelike. This is where Moana comes in.

While still maintaining that cartoon-like feel, this is the first time where actual human characters’ emotions look real. In the past, expressions take on very on-the-nose cliches. Not necessarily over-the-top, but just very obvious. Here, we get facial expressions that look just like yours and mine. It’s eerie. It helps us feel for the characters more–especially when it comes to our title character.

Moana (voiced by Auli’i Cravalho) is a teenager growing up on the Polynesian island of Motunui and longs to explore the ocean. However, her father, Chief Tui, forbids her to leave. The one rule they have on the island is that they cannot go beyond the reef. But Moana is stubborn. Even as the island’s resources are running out, she resiliently tries to persuade her father, but to no avail.

Her grandmother gives her a small magical stone known as the heart of the goddess Te Fiti. A thousand years prior, demigod, Maui (Dwayne Johnson), stole the heart, which is causing each island, one by one, to dry up. Moana sets out to find Maui so he can return the heart to the goddess.

Disney churns out a solid formula piece with Moana. This is a criticism in some respect. But it can also work to its advantage. The general storyline doesn’t really give us any sort of new beats. A girl sets off to do something that we all know she will probably end up accomplishing. We foresee each false victory before it occurs. It starts out predictable and pulls from countless of its Disney predecessors. But it does one thing that’s very unusual for a Disney film–it lacks romance of any kind. The two protagonists–of opposite sex–have a strictly platonic relationship. Love isn’t the point of the film at all. It’s so ingrained in our expectations that it catches us off guard and we are constantly reminding ourselves that the movie isn’t about that.

Moana is a captivating protagonist. Whether or not the writing makes her that way. The animation is just that good. There is one musical sequence where they backdrop the characters against a relatively primitive animated background, which has become an ordinary device used in countless films before. But upon looking at the canvas, it almost seems like it has been thrown into a live-action film. In past instances, there wasn’t as much of a discrepancy, but now the juxtaposition shows just how far we’ve come with animation.

I could gush for paragraphs about the visuals of this movie. But that would only end up overshadowing the film’s other strength–its music.

Lin-Manuel Miranda writes some brilliantly catchy songs–perhaps the best, pound-for-pound, in recent Disney musical history. From the refreshingly bright islandy “Where You Are” to the macabre Bowie-inspired “Shiny”, each track hits hard and becomes addicting. All except for Maui’s solo piece, “You’re Welcome.” It’s Dwayne Johnson’s only song and is marginal at best. The others are creative and take melodic turns that you never expect, but this one falls into the basic realm of uninspired, perhaps best appreciated by your toddler child. It merely goes through the motions, and only appears worse amidst its brilliant companions.

The songs may be fantastic, but the dialogue is curiously weak, and unfortunately separates Moana from the past Disney bunch. At times it feels like it was written by a teenager–or perhaps someone who wanted to sound like one. The comedy gets childish in a couple of instances, though, to its credit, quickly snaps back. Then there’s Maui’s character, who can grate on you a bit. His shtick is a little too colloquial and his jokes often fall flat.

But the film heads in the right direction overall. Often times going one step back and two steps forward. It nicely sticks to its narrative with Moana’s perspective, and never seems to be challenged by it.

The story could have been merely a device to flex its aesthetic guns (it’s not), but it would have all been worth it just to experience the beauty of what’s on screen. Here, the movie isn’t just telling a story, but creating a full experience–something unexpectedly rare these days.