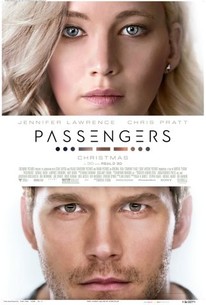 Great sets, cool effects, and an outer space setting–all the typical makings of a sci-fi movie. Don’t let this fool you. It’s a romance film. And a good one at that. It delves deep into the psyches of two characters and sees it all the way through.

Chris Pratt plays Jim, a passenger on board a spaceship heading towards a distant planet in order to repopulate away from Earth. The journey lasts 120 years and all 5000 passengers are supposed to remain in hibernation up until the final descent. After the AI wakes up Jim, he’s excited about all the new people and opportunities he’ll face. Except he discovers he’s been awoken 90 years too early. And he’s the only one who has.

Unable to put himself back into hibernation, he’s alone for over a year. He contemplates ending his own life until he discovers the hibernation pod of a woman, Aurora (Jennifer Lawrence). Her presence gives him hope. He learns all about her from her passenger profile and ultimately falls in love with her. With nobody else on the ship–except a robot bartender (Michael Sheen)–he mulls over the idea of waking her up so she can share in his miserable desolation.

In some regard you can’t imagine another actor in Pratt’s role. His distinct brand of humor and timing gives us the levity we enjoy throughout the film. Then we ask ourselves if we really need it in the first place. He has a chance, here, to showcase his dramatic acting chops. And he really tries, but with somewhat diminishing returns. It’s not terrible, but it’s just enough to question his casting–other than the fact that he’s a marquee name.

His tongue-in-cheek persona just adds to the film’s already-uneven tone, which is only exposed more by its all-too-telling score. I enjoy a couple of the motifs, but I also don’t like being told when my mood should change from happy to sad.

Yet we get a lot out of the performances. Emotions from both leads are felt. Lawrence perfects chilling anger and Pratt does fine with his drowning-soul melancholy. Once she’s in the picture, Pratt’s acting improves drastically. Not many will deny the pair’s chemistry. But you can also make a case that either would have the same chemistry with anyone else they were to share the screen with.

There are a couple of details that are lazily missed, but those plot holes don’t really make or break the overall story of the film. Director Morten Tyldum (The Imitation Game) gives us some lazy cuts, but the DP makes up for it with some deceptively beautiful cinematography.

Although the tonal shifts are all but jarring, its ruggedness works in favor of its self-created hybrid genre. The big reveal is a bit disappointing, but necessary to the greater good of the story.

Passengers is a fantastic love story whose premise only makes sense amidst its intergalactic setting.