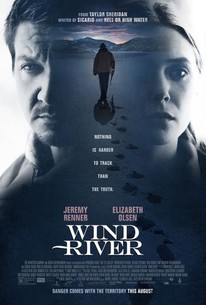 People forget how great an actor Jeremy Renner is. He seemed to get recruited to blockbuster action movies way too early on in his budding career, and hadn’t established quite enough credible roles first. They forget about his phenomenal performance in The Town, or his humble role in Hurt Locker. He got a chance last year in Arrival, and now here in Wind River, Renner gets to flex his chops again.

In this film he plays Cory, a guy whose job it is to track down and kill intrusive wildlife on an Indian Reservation in Wyoming. In the dead of winter, Cory stumbles upon the dead body of 18-year-old Natalie Hanson. It’s unclear how she died, and it resurfaces old wounds of the death of Cory’s own daughter a few years prior. His daughter and Natalie were best friends, and his daughter’s death, too, is a mystery.

We get a somewhat-inside look at the very elusive Native American culture. Even though the story is fronted by a white man, we grow to better understand their mindset and way of life–at least this particular tribe’s. The land is desolate and these people are tormented by the loneliness and isolation. In these circumstances, there is no luck, there is only will to live.

Without saying much, Renner lets us inside his plight every step of the way. It’s not so much about his life as a tracker–an unusual profession–but him dealing with his grief amidst a unique backdrop. One that already comes with sorrow and dismality.

It helps that the script and the direction by Taylor Sheridan are so accomplished as well. He has his grasp around the film as a whole. Not in an auteuristic way, but in a way that lets his performers have a certain type of freedom, molding the film around themselves also.

Renner’s supporting cast is pretty good. Elizabeth Olsen, who plays FBI agent, Jane Banner, transforms her character so well over the course of the film. And Graham Greene plays a modest, yet confident police chief. He seems so real that you would almost expect it to be one of those cases where an actual Native American police chief plays the part. But no, Greene’s credits range from Dances With Wolves to Die Hard 3.

I love films that get much of the tension and suspense from the musical score. Nick Cave and Warren Ellis, who also partnered with Sheridan for last years’ Hell or High Water have added another masterpiece to their résumé.

Wind River is not just a murder mystery, but a sort of Neo-Western. There’s a certain lawless sense you get in this modern town–made all the more clear by the dichotomy of the city girl FBI agent who is culture-shocked by everything that’s going on, and appalled at why there are only six policemen to patrol a land the size of Rhode Island with people who are unhinged.

It very adequately contrasts the mindsets of isolated peoples with worldly city folk. It’s not on the nose, but the themes are obvious if you’re looking. And since they’re not overplayed messages in cinema, they’re welcome with open arms. It helps, too, that they’re presented so beautifully.