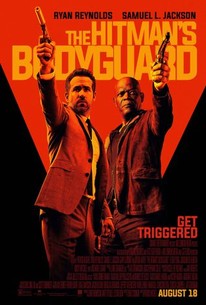 Hitman’s Bodyguard helps prove that it doesn’t take comedians to make a funny comedy film. This isn’t the first time, but the success rate isn’t necessarily high either. However, actually claiming itself as a true comedy might, in fact, be the harder thing for this film to prove.

And it’s not Ryan Reynolds or Samuel L. Jackson’s fault. Pretty much each scene they’re in stays true to genre. But then throw in Gary Oldman as the dark and twisted evil-dictator in subsequent scenes and the film doesn’t get the chance to blend the two together. It feels like two completely different movies.

The first act is filled with convoluted details and rapid-fire exposition, opening up too many plot points all at once, way too early on. Oldman’s character is on trial at the International Court of Justice. The problem is, they can’t find any witnesses to testify against him because he’s hired an assassin to kill everyone eligible to do so. Except for Jackson’s character, Darius Kincaid–a notorious hit man who’s serving a prison sentence.

Interpol makes a deal with Kincaid in order for him to testify. The only problem is getting him all the way to Holland without him getting killed by Gary Oldman’s hired assassins (not really Gary Oldman, but using his character name just adds more details than necessary). That’s where Reynolds’ character steps in. He plays Michael Bryce, a professional bodyguard who used to work for Interpol before a job-gone-bad ruined his reputation.

The tone swings all over the place. It’s very very sinister one moment, and then off-the-wall comedy the next. Then it throws in a seemingly random love story in the middle of it all. The irreverent humor almost saves it, but you still sit there wondering why the love story is happening in the first place. Because if you have to disrupt the momentum of a film just to get a mediocre payoff at the end, it’s not really worth it, right? At least there are other payoffs as well. Bigger ones.

It turns out Kincaid and Bryce have some history and don’t care for each other, which just makes the film more enjoyable. Their chemistry is what makes the it entertaining despite all the cliches and the cheesy action sequences. The action’s not necessarily over-the-top–it’s just silly a lot of the time.

Blending 3 genres together isn’t easy. Which is why it’s usually met with harsh criticism. This is a case in point. But Jackson and Reynolds have enough going for them here to make you okay watching them in a sequel if it ever happens.