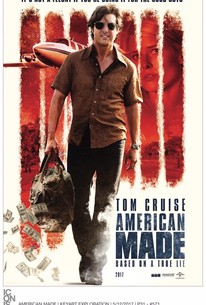 Tom Cruise often gets stigmatized as a guy who plays the same role a bunch of different times. This may be true in most cases. Some outliers, though, would be his character in the films Collateral, Far and Away, and a few others. And now, moviegoers can throw in American Made.

Cruise plays Barry Seal, a TWA pilot who gets recruited by the CIA to take secretive aerial photos of Central America amidst the Cold War in the late 1970s. He quickly finds himself running drugs to and from the States for the Medellin Cartel and Pablo Escobar.

In his most enjoyable performance in years, Cruise brings a different-than-normal charisma to his role. Usually, he plays a character that can’t be beat. You know he’s always going to be okay in the end. You know that if trouble comes, he’ll get out of it scot free. This is also something that can distance audiences from his characters, often coming off as unrelatable. But in American Made, he’s vulnerable, he’s likable, and he’s actually pretty funny.

There’s a very realistic dose of levity throughout the movie. Not like Wolf of Wall Street, where you feel like the humor is grossly over-exaggerated. Here, it’s as though Seal was an advisor during the script writing.

The special effects are very appropriate to the time being depicted. They feel practical. There are no real big explosions or chase scenes–something else out of the norm for a Tom Cruise film.

While being a statement on politics of the 1980s, American Made is also a lot of fun. It’s commentary is mostly ironic. While you’re laughing at the true events, you’re also realizing that they’re simply that.

The momentum builds the crazier it gets. The events start off slow, and the filmmakers refrain from creating any false suspense early on. Then it gets out of control and you feel it.

The only issue with this film is the lack of conscience of the characters involved. Cruise plays a likable guy. “He’s good people,” I’m pretty sure another character says at one point. Yet, he seems to have no qualms about helping out the supremely violent drug cartel in Colombia. However, he doesn’t seem to be in it for the money, because he’s constantly complaining about having more than he needs. He never really spends any of it. And he also never really makes it seem like he’s doing it because he’s too scared to leave, either. At one point, he expresses concern that he’s transporting weapons, but soon forgets about it, inexplicably. I suppose maybe we are to assume that he’s scared, but he never once seems like it. Whatever it is, it’s not nearly transparent enough for those of us invested.

But the film is really fun. It’s about as political a popcorn film can get without making you think too hard. Its narrative doesn’t skip any beats. And preserving the fluid tone is perhaps why we don’t get too much introspection on the lead character’s behalf–or anyone’s behalf for that matter. It gets its point across without it.