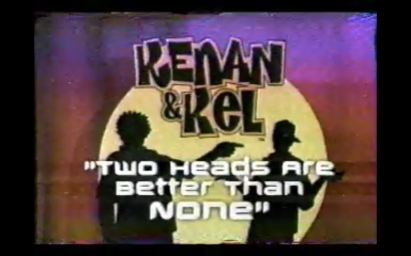 Often times, longer episodes–or specials–of a half-hour sitcom series don’t work. The pacing is all thrown off and the lack of a laugh track makes the jokes fall flat.

And while Two Heads Are Better Than None is a little odd at first without the studio audience, any fan of Kenan and Kel will enjoy this made-for-TV movie. It’s the same humor, minus the scheming by Kenan.

This one lets the boys get into trouble all without having to scheme anything at all. Kel crashes Kenan’s family’s cross-country road trip vacation. Along the way, they encounter the ghost of a headless knight who is looking for a living soul to give him a new head.

The details tend to get a little foggy, but it’s not a far cry from the usual flippancy of the half-hour episodes.

As a kid, this movie made me laugh. And as an adult, it does just the same. There are some great bits and some fantastic minor characters met along the way–like the Shellys or the Milton Berle cameo.

At under 70 minutes, the movie doesn’t try to be longer than it needs to be, so the plot doesn’t run thin. It doesn’t pull any punches. Yet, we’re given a cool, creepy mystery without sacrificing the show’s trademark brand of comedy.

But also much like a typical Kenan and Kel episode, there is no development of character. What you see in one episode is what you see in every episode. And this isn’t a bad thing–it’s just what happens a lot in sitcoms.

Two Heads Are Better Than None is a great way to spend an hour during the Halloween season–especially if you grew up loving Kenan and Kel. It’s silly, but we wouldn’t expect any less.