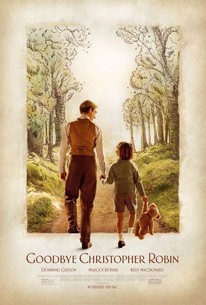 As the credits roll, my wife turns and asks me the obligatory, “Did you like it?” All I can say is, “It’s a beautiful film.”

And it is. Goodbye Christopher Robin is about many things, but, at the same time, just one thing, as it’s all tied together perfectly. It’s about living in the moment and appreciating things as they happen. I know, you’re thinking that this theme has been done a million times. But I assure you, never like this. Not with these dynamics. And that’s always the key to a movie going from good to great.

The film tells the story of how Winnie the Pooh by A.A. Milne came to be. It’s told from the perspective of Milne, played by Domhnall Gleeson, but also particularly from that of his six year old son, Christopher Robin Milne (Will Tilston).

It takes place in England and bridges the gap between both World Wars, showing some before and after for perspective. The father suffers from terrible post traumatic stress disorder from World War I and it affects his writing. He and his family move out of London to the countryside so he can recover. He ends up not writing much there, either–instead, playing with his son. The adventures they go on in the woods surrounding their property inspire in Milne the concept for Winnie the Pooh. His anxiety seems to go away once the fictional bear comes into the picture. And it seems to have the same effect on the rest of the country.

Milne’s wife, Daphne, is played by Margot Robbie in perhaps her most impressive performance yet. Daphne acts selfishly most of the time. Instead of encouraging her husband’s creativity for his own sanity, she does it for herself. So she can have a better life. She punishes him for his own writer’s block. Robbie plays an unlikable woman so well. But instead of putting her into a specific character archetype, the filmmakers make her much more complex than that. She resents her son for the pain he caused her at birth, but at other times displays a genuine sense of love for him. We feel it, but we also see through her eyes, recognizing resentment still in there, deep down.

And that complexity goes for the rest of the film. Nothing is so outrightly obvious. Even the dialogue is free of proverbs and truisms. And the facial expressions are subtly expository. It’s a film that trusts its audience. The nuances run deep. You can watch it again and have the same takeaway, yet notice the different ways its depicted.

A lesser film would have been about how the real life Christopher Robin’s parents were bad parents. But that would be too easy. There is no black and white. His parents are less than decent most of the time, sure, but there’s an awareness of it–at least by his father. And at times it’s like he’s trying to fight it, but just can’t. He goes along with his wife in order to gain her approval.

Gleeson lets you into his psyche every step of the way without holding your hand through it. You have to look carefully at times, but it’s always there.

This film connects with our emotions in a way that most other films don’t. Or can’t. It doesn’t use cheap techniques or cliched scenarios. It’s honest and real. Like life. Maybe even a little more than that.