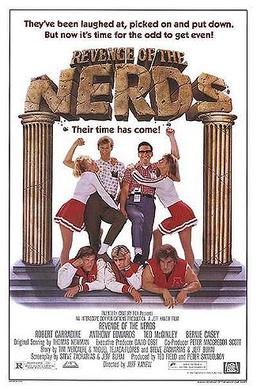 Forget the low-brow title. Revenge of the Nerds is not your typical low brow comedy. It hits all the marks that its contemporaries hit (e.g. Porky’s or Fast Times at Ridgemont High), but does a couple other things that those films don’t. The premise is thin, but within that thinness, there is a different kind of appeal.

A lot of these ’80s teen comedies don’t have much of a plot, instead relying on their antics. And most of the time, that severely dates the film. But Revenge of the Nerds holds up despite all this. It’s because the characters are unique and individual from each other. Their personalities are well-stated and they’re not just carbon copies of each other.

And within the diversity, the characters are genuinely funny–not just filled with well-conceived ideas executed poorly.

The film follows a group of nerdy friends during their first year of college. Due to a series of events that are not only unrealistic, but illegal, they are forced out of their dorms and end up forming their own fraternity in order to have a place to live.

The nerds are constantly being picked on by the football fraternity, and vow to have their revenge in order to be taken seriously.

The writing is way better than it needs to be, creating its own formula out of its looseness and avoiding most cliches. There’s never any forced drama between allies, and we don’t feel completely manipulated by events in the script in order to fulfill its final agenda. Though somehow it finds a way to be poignant in the end.

There aren’t a ton of plot points or big laughs, but even when it’s not funny, it’s fun. And many of the scenes find themselves burning a place in our memories.

Revenge of the Nerds is never boring, and not nearly as dated as it probably should be. The dialogue holds up, and so does its powerful ending.