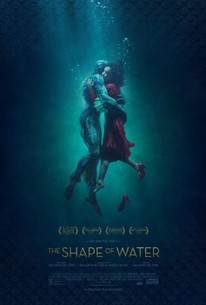 I always say that a film’s true greatness is found in how close the finished product is to the filmmaker’s true vision. This doesn’t always mean that it’s in line with our own personal enjoyment, but you can’t deny that it’s well-done.

The Shape of Water is a pretty good example. Not everyone will be into it. It’s very weird, yet it’s almost too normal to be weird.

Set in the early 1960s, Sally Hawkins’ character, Elisa, works as a cleaning lady in a government lab building. She’s mute, but can still hear. One day, she discovers a human-like animal that is being treated violently in some top secret room. It looks like the Creature from the Black Lagoon. She becomes very empathetic, and even sympathetic towards this creature, to the point of falling in love with it.

That’s when the weirdness starts. The film turns into a love story between Elisa and the creature. If you thought that Harold and Maude was too much, you’ll likely not enjoy this one either.

It all feels too relatable, while at the same time distances itself from us by using foreign examples to help us sympathize. It becomes preachy, which is actually a turn off, because of the fact that it’s a little too real. At times you just wish that it possessed more of a sci-fi tone, so then it could just be weird and nothing else.

It’s also hard to stay invested because the creature we are rooting for has few redeeming qualities. It’s animalistic and even eats cats. I mean, so did ALF, but at least he was able to joke around and cohabit with humans.

I appreciate the visionary set design and artistic direction, but it’s just too strange for me, and will be for many people. I usually don’t even mind if the themes and message of it all are too on-the-nose, but here it’s not worth sitting through all the weirdness.

Oddly enough, you still know that this is probably the exact film that writer/director Guillermo del Toro wanted to make. And that makes me respect it as art, but I just don’t really care for it as entertainment.