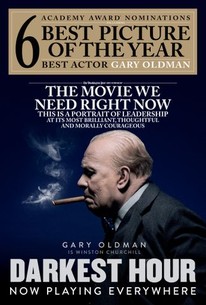 Often times when actors play historical figures, there’s a small inkling we have that they’re still only acting. Whether it’s due to forced or phony idiosyncrasies, or an unnatural sounding cadence. But there are those rare performances where the actor truly becomes the person they are portraying. So much so that you never once think about the actor. Some examples being Daniel Day-Lewis as Abraham Lincoln or Michelle Williams as Marilyn Monroe. And now you have to add Gary Oldman in one of the best acting performances you will ever see.

What Oldman does as Prime Minister Winston Churchill feels so effortless. Each word and facial expression is so subtly nuanced. At times you can barely understand what he says, but even that is beautiful too. Everything he does feels so natural as if it’s actually Churchill himself.

A lot of it has to do with director Joe Wright giving Oldman the freedom to have at it. In a 2-hour film, it’s harder to keep up this kind of perfection for a leading actor. There’s more screen time to mess it up. But Oldman’s true genius is able to surface, with Wright honing it in.

The film depicts Churchill’s coming to power in 1940 and dealing with Hitler and his attack on British troops at Dunkirk. Most of Churchill’s advisors agree to come to a peace treaty with Hitler, but Churchill’s conscience keeps telling him otherwise. He doesn’t want to fall into the same trap that other countries have–feeding into and negotiating with an evil tyrant.

Initially, Parliament writes off the Prime Minister as a buffoon, but he rises to the task. And you get to see the growth of his relationship with those around him, especially King George VI (Ben Mendelsohn).

Most of the movie takes place in a war strategy room or at Churchill’s home. The subject matter is dry, but you feel its weight. Churchill is exhausted and we are too, in the best way possible. Like after a great workout at the gym or completing a 300-page novel. It’s tough, but we feel accomplished afterwards. If you struggle with slower films, I suggest watching the movie Dunkirk first. Although it, too, is slow for an action film, it really helps put all of this into context.

But the script, written by Anthony McCarten, is so fluid and catchy. It helps that the real Churchill always talked as though he was scripted anyway. But Wright and McCarten could’ve just told the story. Instead, they make the scenes memorable. You can tell they had fun making the project and that McCarten enjoyed writing it.

Perhaps the only issue is that, before we care about the ancillary characters, the film tends to flounder when Oldman isn’t on screen. This gets fixed about halfway through, once we’re fully committed.

Lily James plays Churchill’s secretary, Elizabeth Layton. James is flawless in her role, proving that she has the potential to become one of Hollywood’s best talents.

After watching The Darkest Hour, you will feel like you know Winston Churchill the man, as well as understand what he went through while in office. Luckily we have the perfect guy to show us.