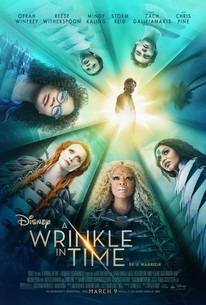 There’s a reason why Madeleine L’Engle’s 1962 novel hasn’t been adapted into a feature film before. (There was a forgettable 2003 mini-series, but that’s it.) The story just doesn’t translate to the screen well.

In this most recent version, director Ava DuVernay tries to show us the abstract concept, yet attempts to market the film towards teenagers–succeeding at neither. It’s likely that the powers-that-be had conflicting opinions about which direction the film should go.

From early on, you can tell that A Wrinkle In Time tries to be too cool. But it’s not nearly as cool or fun as it thinks it is. It finds itself stumbling when trying too hard to appeal to a younger audience, and seems awkwardly out of place when it tries to pontificate. It tries to do so much that it’s unable to retain any distinct personality.

The premise seems promising, but never really takes off. And while there are a lot of fun time travel concepts introduced, the filmmakers fail to capitalize on this intrigue.

Thirteen-year-old Meg Murry (Storm Reid) deals with the four year anniversary of her father, Dr. Alexander Murry’s mysterious disappearance. Because of the opening scene, we know that he’s some sort of scientist who’s into time travel and inter-world teleportation. He was apparently looking for the key to allow himself to do so.

So for the whole film, Meg, her brother, and her friend travel from world to world searching for her father.

The story forces this mystique that’s fun at first, but gets old. It never fully explains itself or feels worth it. Disney is trying to put together a narrative version of a concept. An interesting one, but not one that can afford to lack any integrity–or else you get an end product like this one.

But the truth is, even if the novel could be executed well in narrative form, this version of A Wrinkle In Time doesn’t have the other ingredients that typically make a film good, either.

The whole movie is disjointed, from the aimless directing to the convoluted script–which gives us plot points that merely serve as functional to the overall story. There’s no forgetting why everything is happening. We’re hardly ever able to get lost in the movie itself.

Then there’s the acting. It’s pretty bad considering the talents involved. Most of the performances (e.g. Reese Witherspoon, Levi Miller) are reminiscent of overacted children’s theater, while the ones with more potential (e.g. Michael Peña, Zach Galifianakis) go underutilized.

The visual effects don’t quite look as up-to-date as they should. But the art design is impressive, so it’s visually pleasing. You might ask how such a beautiful film can be so underwhelming. It’s because it’s more into itself than it should be. And we’re not nearly as impressed with it as it is with itself.

A Wrinkle In Time is a story about the abstract nature of the universe, and to its credit, the film editing is just as abstract. But at times it’s just too much. Once again: It’s a narrative version of a concept and it just doesn’t work.

There are glimpses where we can see it resisting the urge to give into typical cinematic formula. Yet there are other instances where we’re reminded that this is a movie made by Disney, trying to sell tickets and not much more.

So then we’re suddenly not surprised that such a bad movie can somehow manage to make us invested enough to feel for its characters (I’m giving credit to the musical score).

A Wrinkle In Time is a movie conflicted with itself. Subtle details become vague and unexplained, while the filmmakers belabor the obvious through redundant and boring sequences. Its point is that darkness is the only thing that moves faster than light. But the way it interprets that darkness is much more subjective than a moral compass would have it be.

And now I’m belaboring my own point. But at least mine doesn’t take 2 hours to do so.

If you want a similar, more watchable movie, check out 1984’s The NeverEnding Story. It covers much of the same ground but with much less of an agenda.