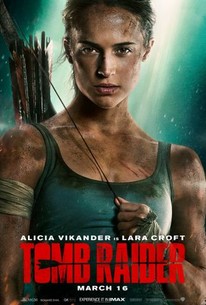 If you look at the first two Tomb Raider films from 2001 and 2003, and then look at this one, you’d never guess they’re from the same franchise unless you take note of the names of the movies or characters.

But this new installment is an origins story. Instead of Angelina Jolie in the role of Lara Croft, we get Alicia Vikander. Vikander is much better for this vulnerable version of Croft, as opposed to Jolie’s smooth arrogance. Here we see her coming to learn her identity as the tomb raider, whereas before, we jump right in and her identity has already been established.

Here, Croft is an aspiring kick boxer who’s in debt to her gym and is barely making ends meet as a bike courier. Her father, Richard (Dominic West), has been missing for 7 years. She refuses to sign the inheritance papers that would guarantee her over a billion dollars, because that would mean that he’s really dead. I guess I can empathize with that sentiment, but it still doesn’t make much logical sense for someone as smart as Croft apparently is.

Her father was obsessed with the supernatural and the hereafter. And Lara finds a clue left behind that sends her on a hunt to find out how he died. And now, apparently she has money to fly to Hong Kong to investigate. (One example of the small details that go lazily overlooked in this new movie.)

As well as a script hits its marks in a macro sense, it needs to hit them in the micro sense, too. That’s where Tomb Raider falters. Overall, the script gives us an extremely intriguing story with a lot of fun twists and turns, but it’s these little things that keep it from being better.

However, it’s not all the script’s fault. Director Roar Uthaug has issues handling emotions properly. In an early scene, Lara is seen watching a video that her dad has left her, speaking to her in a “If you’re watching this, I must be dead” type of way. There are no welled up tears, or bittersweet smile–just an apathetic look on Vikander’s face like she was expecting to hear all this. This great opportunity to evoke emotion out of the audience never gets taken advantage of, and we’re left wanting more from it, as well as our lead. If that doesn’t make our hero cry, what will? And do we want to invest our emotions in someone who seems void of them, herself?

But here’s the biggest issue of all: As entertaining as the Vikander Tomb Raider is, her version of Croft isn’t Lara Croft at all. She shares the same name, sure, but nowhere in this film does she show the same passion in digging up and collecting old artifacts, a la Indiana Jones. This version of Croft desperately wants to find her father, but expresses zero interest in historical relics or tombs at all. So what makes her a tomb raider? Nothing. Her dad was. But she is not. It’s hard to say that it does is source material proud.

In a standalone movie of a different name, half of these mistakes would be non-existent, but simply because it calls itself “Tomb Raider” they become irritants. Like, for this review, I’m not even going to go into detail on the legend discussed in this film, because Lara Croft doesn’t care, so why should it matter?

The film is actually highly entertaining with impressive–albeit unrealistic–action scenes, but it just doesn’t feel like a Tomb Raider movie.