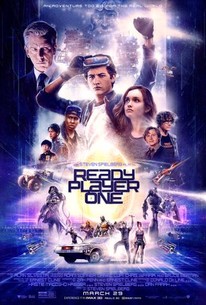 Steven Spielberg may seem like an odd choice to direct the feature film adaptation of the acclaimed Ernest Cline novel, Ready Player One. First of all, it’s not quite on the same wavelength as recent Spielberg offerings (e.g. The Post or Lincoln). Secondly, the director helped define the exact era being obsessed about in the story.

If you’re an achingly nostalgic person, then this is the movie for you. The film’s protagonist, Wade Watts (Tye Sheridan), is obsessed with ’80s pop culture. It’s the year 2045 and everyone is. In this version of earth, there is a virtual reality world/game called the OASIS, which almost everyone takes part in. They just put on these goggles and enter into their avatar’s body. The world is flooded with references from old video games and movies. Wade’s avatar drives Doc Brown’s DeLorean from Back to the Future.

But Ready Player One has something bigger to say. Touching upon the risks of becoming so detached with the real world that we forget what it’s really like. However, this threat never feels like a reality check in the movie. To the point where perhaps it doesn’t even have an opinion on which is better, one way or another. But that a balance of the two is what should be strived for.

In fact, watching the film may have us dreaming about how cool it would be if a place like this really existed. We can see the baggage that comes with it, but still, wouldn’t it be kinda worth it? To those of us who truly appreciate its purpose, it definitely would.

After the creator of the OASIS dies, he poses a challenge to all the users to find an Easter Egg that will give the finder complete control over the OASIS. So we follow Wade and his friends from inside the game, in a Willy Wonka and the Chocolate Factory sort of way, as they embark on this mission to find the Egg.

The movie takes us back and forth from the OASIS to reality so seamlessly that we almost have to remind ourselves which is which–intentionally, no doubt. Credit to the special effects team as well, but this detail also helps show how close the two worlds actually are.

Spielberg definitely has his hands full, but does well with the highly involved plot. He’s always known how to take a complicated story and trim the fat. In Ready Player One, the story does tend to get confusing a couple of times, but we end up getting back on track each time.

Just about the only thing he doesn’t do well is give us entertaining battle scenes. The nonsensical, Michael Bay-type action is the only aspect that can stifle the momentum a bit and cause our minds to wander–the one thing we don’t want to happen in this movie.

But that isn’t enough to make you dislike Ready Player One even in the slightest, since, unlike Michael Bay, there isn’t an hour’s worth of it.

While Ready Player One is very much inspired by–some would say derivative of–countless films before it, it’s an amalgamation of it all.

It’s the type of film where you should leave your critic’s badge at the door, because the things that it does wrong don’t matter. If you obsess about it, then you’re missing the point. It should be viewed as pure entertainment. It’s a much better experience that way.