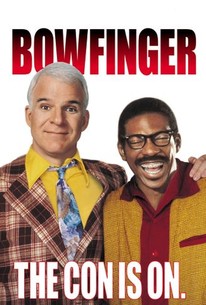 What makes Bowfinger such a smart satire is that it doesn’t throw in jokes just to please audiences from the film industry, but outsiders as well. Situations are included to lampoon not only Hollywood, but everyday people.

Some satires are more esoteric, but few are generally enjoyable by all. Bowfinger is the latter. Mainly because it revolves around people who don’t understand the thing that’s being satired. Or who understand it as an outsider would.

It follows Bobby Bowfinger (Steve Martin), a filmmaker on the verge of bankruptcy, mostly because he’s clueless–typical Martin trope. He gets a script that he thinks is amazing–even though it’s not. It’s about aliens coming down to Earth in raindrops. In order to save his studio, he decides to make the movie on a $2,000 budget and feature the biggest name in Hollywood–Kit Ramsey (Eddie Murphy). Except Ramsey doesn’t know he’s in it. Bowfinger uses discrete techniques to film Ramsey when he’s not looking. It helps that Ramsey has an alien paranoia already, so he’s easily tricked.

Martin is his usual uniquely goofy self, while Murphy is amazingly transformative as Ramsey, as well as his cheaper look-alike, Jiff.

Jiff is a naive simpleton who looks exactly like Kit Ramsey–except not as cool. He has buck teeth and glasses, and stands hunched over (see photo above). He’s used in several of the scenes in Bowfinger’s alien movie due to his uncanny resemblance. My biggest complaint is that they didn’t utilize Jiff more. He feels more like an afterthought, even though he’s the most iconic image from this film (see photo above). The possibilities are endless, but they seem to end all too early.

But a lot of the film feels sporadic or randomly put together. Frank Oz‘s direction could be a little smoother. The scenes don’t blend together as well as they could. But at least nothing feels out of place. In fact, even the most minute details still come together for a common purpose.

Bowfinger is very funny and has some great moments. The premise is so ridiculous, but it’s handled in the most realistic way possible. Even for Martin. If there were people who were this idiotic, this is probably how the scenario would go down.