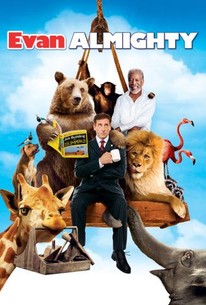 Evan Almighty may be the less-regarded sequel to Bruce Almighty, but let’s take a second to realize that Bruce Almighty isn’t a perfect movie either.

In fact, they’re very different from each other. Character traits and basic plot points are changed from the first to the second film in order to make the premise work. Newscaster Evan Baxter (Steve Carell) moves to Washington DC with his family after winning a seat in Congress. After being urged to pray by his wife (Lauren Graham), God (Morgan Freeman) appears to Evan and tells him to build an ark and collect two of each animal in preparation for a flood. Evan is no longer the mean-spirited newscaster from the first movie. He’s a family man now. He’s basically not even the same character.

The two movies contain different types of stories. Evan Almighty is much less of a hypothetical experiment as it is a humorous anecdote. Evan isn’t gaining any real powers really, but just going along with a plan. This film is actually much more similar to The Santa Clause than Bruce Almighty.

Over the course of this film, Evan’s appearance changes. He’s forced to don a beard and wear a robe to get into the Noah spirit. And animals follow him around everywhere. These don’t really end up being necessary to the plot, but it adds a lot of humor. The entire town and country think he’s crazy and his job in Congress is in jeopardy because of it.

Evan Almighty is much more Christian-driven and God is given more of a role. That tone is consistent throughout. It’s much more poignant than a story of this nature probably should be. The complexity of Evan’s relationship with God is explored more than Bruce’s in the last film. Although it’s a little more sloppy in its details and the script isn’t quite as refined, in some regards this movie is still put together a little better.

It’s also much more grounded, since Carell is more down-to-earth compared to Jim Carrey (who played the Bruce in the previous film). He’s not as wild and spastic. His animation is reeled in, and comes and goes when necessary. This movie could have easily been very silly and childish, but has a mature quality, which is appealing amidst the chaos.

While Bruce Almighty may maximize its usage of Carrey’s talents, Evan Almighty doesn’t quite get the best out of Carell. But with that said, it’s still just as entertaining.