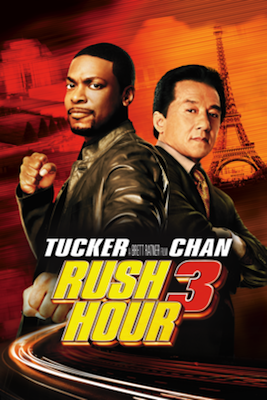 Rush Hour 3 gets a bad rap. People say that we didn’t need a third Rush Hour film, but fans of the first two will disagree. Do we ever NEED sequels to comedies? Not usually. But a lot of times they can be worth it. Rush Hour 1 didn’t break any new ground, so I guess we technically didn’t NEED that movie either. But while we’re at it, we might as well keep them coming and continue being entertained.

The concept of Rush Hour 3 is far more intriguing than in the previous film, with an actual coherent plot. This third installment begins as Ambassador Han (Tzi Ma) nearly gets assassinated when he is about to reveal the identity of the Shy Shen–a legendary individual that holds the names of the leaders of the Triads. Detective Lee (Jackie Chan) and Detective Carter (Chris Tucker) venture to Paris to find and protect this individual. The plot isn’t as predictable. Plus, we get some great twists and turns.

Tucker and Chan are still pretty funny. I’d say funnier than in Rush Hour 2. Even though Tucker’s leash is just as short, the jokes are better written and more unexpected than in the last film, where a lot of the humor comes from inside jokes from the first movie.

We’re actually given some good action sequences, with Tucker finally “learning” martial arts and joining in on the action. There’s a really impressive final fight scene that highlights the already well-complimented movie.

I wouldn’t be against more Rush Hour movies. When it’s all said and done, they’re harmless entertainment founded on two actors’ dynamic chemistry. Who wouldn’t want more of that?